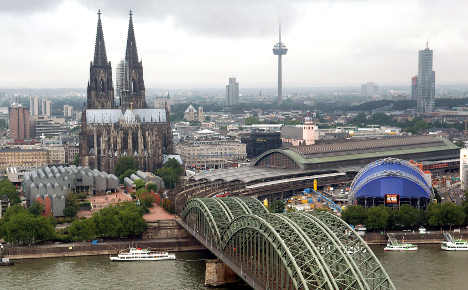 From ceramic dishes and tools to toys, animal bones and jewellery, some 250,000 artefacts have so far shed light on various periods in 2,000 years of the city of Cologne’s history.

And they include many piecing together Cologne’s little-known but rich Jewish history.

But plans to display the findings, discovered since 2007 by head archaeologist Sven Schütte’s team at the 10,000 square-metre (32,800 square-foot) city centre dig, in a new museum have proved divisive.

Just over 400 kilometres (260 miles) away, Berlin already hosts a large Jewish museum, and critics argue that Cologne cannot afford a new cultural project when its coffers are already in the red.

“For a very long time, archaeologists quite simply ignored the Jewish past of Cologne,” said Schütte.

“Anything that wasn’t of Roman origin wasn’t excavated, since the Middle Ages were of little matter and Jews weren’t supposed to have played any role,” he lamented.

From the 10th to 12th centuries, Cologne, today Germany’s fourth-largest city, was one of Europe’s biggest cities, even ahead of Paris and London, with about 50,000 inhabitants.

Its prosperous Jewish community numbered nearly 1,000 at its height. On Hebrew-inscribed fragments of slate, aspects of daily life from the Middle Ages have intriguingly come to light via school children’s teachings, rules and regulations, a bawdy knight’s tale and even a bakery’s customer list.

The history of the city’s Jewish quarter spans 1,000 years, from Late Antiquity to the Middle Ages, and far from being closed-off from the rest of the city, it was open and adjoined the Roman governor’s imposing palace and later the city hall.

“Excavations show that the Jews in Cologne for a very long time were on good terms with the Christians, that their cohabitation saw long phases of peace and harmony,” Schütte said.

He pointed to the synagogue’s Gothic style and richly-decorated altar, believed to have been constructed by French craftsmen employed on the nearby cathedral construction site.

But two events finally sounded the death knell for the Jewish quarter – a crusader massacre in 1096, followed by its eventual annihilation in 1349 when the Christians made the Jews the scapegoat for a black plague epidemic.

Archaeologists hope to see their treasures on display in the new museum by 2017.

“It won’t be a so-called ghetto museum limited to presenting religious artefacts but a museum tracing this quarter’s daily life, its integration in to the Christian city, with the positive and negative aspects,” Schütte said.

But the project has its detractors and opponents, he said, adding that an empty suitcase had been placed within the site recently, sparking a phoney bomb alert.

“And elsewhere someone engraved a swastika,” he added.

Meanwhile the opposition conservative Christian Democrats (CDU) on the local council have attacked the plan over its cost and condemned as “madness” spending more than €50 million when the city is already deeply in debt.

“Cologne cannot allow itself to build a new museum,” leading local CDU politician Volker Meertz said, also questioning how it would stand out from the Jewish museum in the German capital.

Some 2,800 people have signed a broad-based petition against the museum.

“The protest is populist. It’s not baiting the far-right but it could be a platform for the far-right and political die-hards,” said Abraham Lehrer, a leading member of Cologne’s Jewish community.

“Social expenditure is being cut independently of the museum’s construction. If it isn’t built, nothing will change,” he told the weekly Jüdische Allgemeine Zeitung.