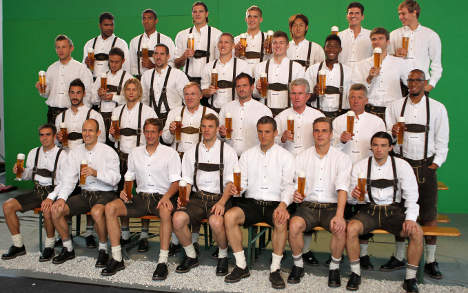 The Bundesliga powerhouse is set to wrap up the championship way before it is officially finished. Second-place Borussia Dortmund made the Bavarians wait a little longer by winning their match at the weekend, making Bayern’s 9-2 victory over Hamburg little more than a pleasant distraction.

But Bayern need just one more point from the seven remaining Bundesliga games to make them champions.

Initially Bayern would not break concentration to party – there is too much else hanging on the team’s continued performance.

“Obviously it would be an incredible moment but one we’d only be able to savour very briefly,” the club’s sporting director Matthias Sammer told Bild newspaper on Thursday.

The first leg of Bayern’s Champions League quarter-final against Italian champions Juventus comes next week, and the team will focus on getting ready for that.

Yet before the deadly serious matter of trying secure the treble of Champions League and German Cup as well as the Bundesliga, the Bavarians will allow themselves and their fans a bit of a laugh.

“Assuming everything is looking good with the guys, with no injuries or other concerns, we’ll play the last league match in lederhosen,” defender Rafinha told Portuguese sports newspaper O Jogo.

“We won’t need the points and it will be a nice way to show our fans and the world that although we are focused on winning when it matters, we can also have fun on the pitch.”

The Portuguese player remained coy about why the team was ready to don the traditional Bavarian leather shorts for the last match, only divulging that it was the result of a “locker room bet”.

Should this actually happen, the leather-clad Bayern players would face off on May 18th against Borussia Mönchengladbach – from the western Rhineland where lederhosen are not de rigeur.

Former team doctor Hans-Wilhelm Müller-Wohlfahrt said special precautions would be taken should the team decide to wear lederhosen while playing.

“There is a very real risk of chafing particularly for those players whose lederhosen are not broken in. I will recommend that players grease their thighs thoroughly with goose fat before the match,” he told the Ärzte Zeitung doctors’ newspaper online edition at the weekend.

Players will have to wear their football shirts over the straps which hold up the traditional leather shorts. “That is a matter of safety – we would not want any accidents with players getting tangled up with each other,” said Müller-Wohlfahrt. “That would not only be dangerous, it would be downright silly.”

Any adventures playing in leather would have to be gotten over swiftly – the last Bundesliga match is just a week before the Champions League final which will be played at Wembley, London on May 25th.

Should Bayern triumph there – and then go on to win the German Cup a week later on June 1 – they would manage the legendary treble, something which former Bayern midfielder Franz Roth said at the end of February, the club could manage.