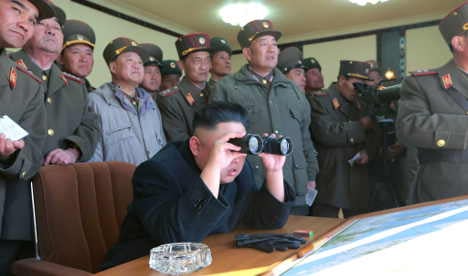 The comments came as North Korea says it is in a “state of war” with its southern neighbour. State media released a statement on Saturday threatening “stern physical actions” in response to provocation.

The regime said military bases in the United States and Pacific would be the first to be hit. North Korea has sharpened its belligerent rhetoric in recent weeks and has responded with fury to joint South Korean and US military exercises over its territory.

Westerwelle accused the country of thwarting attempts to impose effective weapons controls worldwide by vetoing – along with Iran and Syria – the first ever international treaty to regulate global conventional arms trade.

He said although the images and rhetoric emerging from North Korea may strike many as anachronistic, the country presents a real threat to peace in the region.

Westerwelle wrote: “What’s happening on the Korean peninsula may seem far away, but it affects the security architecture of the whole world,” adding “North Korea must stop its irresponsible playing with fire.”

He said Germany was working with its partners to impose sanctions to ensure North Korea withdraws its threats and puts an end to its nuclear programme. He also stressed the importance of “constructive action” from the Chinese government.