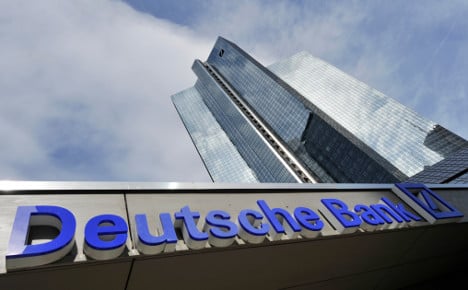 S&P said in a statement it has placed Deutsche Bank’s “A+” long-term rating on “CreditWatch with negative implications.”

The move “follows Deutsche Bank’s announcement that it has increased its provisions for litigation in 2012 by €600 million ($769 million) compared with the preliminary results it released in January this year,” the statement said.

The bigger-than-expected provisions forced the bank to restate its year-end net profit for 2012, which now stood at 291 million euros compared with €4.326 billion in 2011.

“We view the group’s 2012 results as weak overall,” S&P said. “We believe ongoing economic, regulatory, and legal risks will continue to hurt the bank’s performance.”

Deutsche Bank’s capitalisation was “still below peers’ in our view, despite a significant improvement on the second half of 2012,” the rating agency continued.

“The revised results lower the starting point for our projected risk-adjusted capital (RAC) ratio at year-end 2013. This ratio is our measure of a bank’s capital cushion against unexpected losses.”

Deutsche Bank is currently being investigated over allegations that some of its employees may have been involved in rigging the Libor and Euribor interest rates. And one of its co-chief executives, Jürgen Fitschen, is among a number of top managers suspected of involvement in a tax evasion scheme in the trading of carbon emissions certificates.

Deutsche Bank said its so-called Core Tier One capital ratio — a measure of a bank’s ability to withstand unforseen risks — slipped to 7.8 percent in 2012 from 8.0 percent announced at the end of January.

A Deutsche Bank spokesman declined to comment on S&P’s move, but insisted that the group was confident of attaining its target for a capital ratio of 8.5 percent at March 31.

Investors were not so sure and Deutsche Bank shares were the biggest losers on the Frankfurt stock exchange on Wednesday, shedding more than 3.0 percent in slightly softer market.