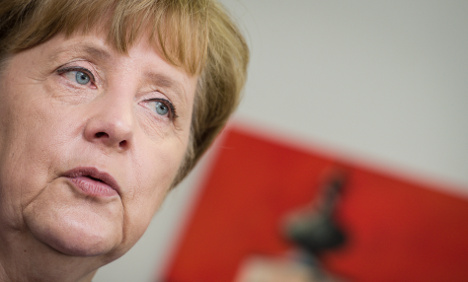 “The result is a fair one for everybody involved,” Schäuble told a news conference.

“I think it’s a good one” and it will “serve as a basis for negotiations with the troika” of international creditors, he said, adding that it would “help win back lost confidence” and shore up Cyprus’s finances.

The deal will resurrect a bailout for its government, but only after a radical downsizing of the island’s financial sector.

“I am very pleased that a solution for Cyprus was successfully reached last night which meant that the country’s insolvency was averted,” said Chancellor Angela Merkel in a statement ion Monday.

The deal was a “fair distribution” of the burden and “also requires those who have contributed to causing these undesirable developments to take responsibility”, she said.

Merkel said: “On the one hand, the banks must take responsibility for themselves. That’s what we have always said. We don’t want taxpayers having to save banks but that banks save themselves.”

Cyprus President Nicos Anastasiades battled for 12 hours with his eurozone partners and the IMF before the last-minute deal was reached.

In the end, he let one banking chain go to the wall and left major investors in the island’s biggest bank – many of whom are Russian – take a giant hit. He was, he said, content with the deal.

And the head of the Eurogroup of finance ministers, Jeroen Dijsselbloem of the Netherlands, insisted: “We’ve put an end to the uncertainty that affected Cyprus and the euro area over the last few days.”

Under the terms of the agreement the island’s second largest lender Laiki (Popular Bank) will be wound up overnight, an operation Dijsselbloem said would deliver a €4.2 billion ($5.5 billion) saving. Small savers would be protected.

Schäuble told journalists: “Unsecured deposits of more than €100,000 are frozen and will participate in the necessary recapitalisation” of the banking sector.

Banks to reopen on Tuesday

Loans to the government in Nicosia once the parliament there approves the deal in April, will total €10 billion ($13 billion).

The Bank of Cyprus, the island’s foremost lender, survives – but it will have to endure a major “haircut” on all deposits of more than €100,000.

That is a massive blow to its major investors – and the bank holds the lion’s share of the island’s Russian deposits.

As the crisis unfolded last week, Russian leaders refused to supply fresh aid or extend a 2014 repayment date on an existing €2.5-billion loan to Cyprus.

But the previous plan for a raid on all savings, which last week provoked angry responses from everyone from Cypriot pensioners to Russian President Vladimir Putin, has been ditched.

Dijsselbloem said the new deal, reached after a week of turmoil that plunged the eurozone back into crisis, was a “much better” outcome.

Key details of the deal remained sketchy, with EU and IMF officials working out the likely percentage levels “over the coming weeks”.

Bailout bosses could “not put a figure on that,” Dijsselbloem said. He could not say when the banks on Cyprus would re-open, nor when restrictions on cash withdrawals and other capital controls would be eased.

The banks had been scheduled to reopen on Tuesday after 10 days.

“We have to find a balance between prudence and stability,” Sarris told reporters. “We are going to decide as quickly as possible the exact day when the banks will reopen,” he added.

The final bailout will also involve a Cypriot government austerity programme, privatisations and tax changes at a time of deepening recession given job losses at banks and companies losing out on deposits.

European Union Euro Commissioner Olli Rehn said new economic forecasts for Cyprus would need to be drawn up quickly to take account of the deal.

Rehn said the Cypriot government would decide when to lift capital controls, which saw daily withdrawal limits at cash machines reduced to as little as €100 per day on Sunday.

International Monetary Fund head Christine Lagarde said the deal provided “a comprehensive and credible plan to deal with the current economic challenges in the country”.

Once the technical details had been worked out she expected to recommend to the IMF executive board that the organisation provide Cyprus with financial support, she said in a statement.

A major sticking-point throughout the talks was the European Central Bank’s demand for the Bank of Cyprus to assume €9 billion in Laiki liabilities to Frankfurt: during Sunday’s talks, Anastasiades finally accepted that.

The ECB had threatened to halt life-support funding for Cyprus on Monday if there was no deal, but Dijsselbloem said he expected that support now to continue.

The volume of Cyprus sovereign aid is a pittance compared with Nicosia’s closest ally Greece, which needed hundreds of billions in the eurozone’s first bailout, which started almost exactly three years ago.

But some leaders and economists had worried that the fallout from the Cyprus crisis could spread to other troubled economies such as Spain and Italy.

This latest deal means Cyprus becomes the fifth eurozone country to win international aid for its banks, after Greece, Ireland, Portugal and Spain.

News of the Cyprus deal boosted the Asian markets Monday. The euro also enjoyed a bounce, as investors bought on the back of a deal they hope will draw a line under the crisis, which sent shares tumbling last week.