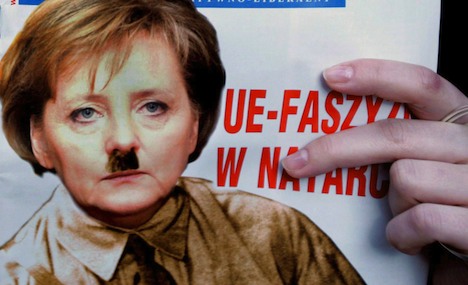 A Polish magazine once even had a Merkel-Hitler picture. Photo: DPA

The column was published on the paper’s website and in its Andalusia regional edition, economist Juan Torres Lopez of the University of Seville.

“Angela Merkel, like Hitler, has declared war on the rest of the continent, this time to guarantee (Germany) its vital economic space,” he wrote in an apparent reference to the Nazi concept of finding Lebensraum for the Third Reich.

“She punishes us to protect her large companies and banks and also to hide from her electorate the shameful model that has seen the poverty rate in her country rise to its highest level in 20 years, 25 percent of employees earn less than €9.15 an hour and half the population represent… a miserable one percent of all the nation’s wealth.”

After the column provoked shocked reactions online, the newspaper took it down from its website and apologized.

“El Pais has withdrawn the article ‘Germany against Europe’… because it

contained statements that this newspaper considers inappropriate,” it said.

“El Pais regrets that a supervisory error allowed the publication of this material. The opinions expressed by Torres Lopes are his alone.”

“Bitter. Now El Pais has also published an editorial, in which Merkel is compared to Hitler,” wrote Robin Alexander, a journalist with German daily Die Welt, on the online message service Twitter.

“To put Merkel’s policies on a level with Hitler’s is as loco (crazy) as it gets,” Mathieu von Rohr, Paris bureau chief for German weekly Der Spiegel, wrote on Twitter.

“Of course Merkel’s (and everybody’s) stance may be criticized. But to use Hitler is incendiary, stupid and irresponsible.”

But the retraction also drew criticism.