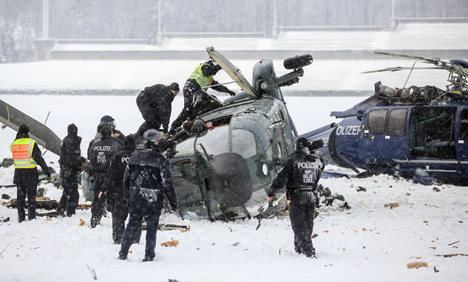 The two federal police choppers likely flew too close to each other and at 10:40am clashed rotor blades mid-air before spinning into a field next to the Olympiastadion in the northwest of the city.

At least four people were seriously injured and one person was killed, while many others suffered minor injuries, Tagesspiegel reported.

“The accident makes clear to the extent of danger my colleagues face each day,” co-chair of the Berlin police union Hans-Joachim Zastrow said in a statement.

Photos from the crash scene

Each helicopter was carrying between 20 and 25 officers. A third helicopter involved in the drill was able to land safely.

Media reports suggested shortly after the crash that fatality was one of the helicopters’ pilots but this is yet to be confirmed by police.

Eyewitnesses said the choppers’ rotors had stirred up snow from the ground as flurries continued from the sky, further limiting visibility, and two of the helicopters’ blades touched.

“It was a real squall – suddenly we heard a bang and someone shouted ‘Everyone on the ground!’,” a witness identified only as Johannes M. told NTV rolling news channel.

“There was blood everywhere. There was an enormous pool of blood next to me.”

Bild daily newspaper said panic broke out among the survivors, many of whom raced to flee the site. Police on the scene cared for the wounded next to the smoking wrecks of the helicopters.

Police involved were trained to use helicopters to control football crowds on match days – the Olympic stadium is used by the city’s Hertha BSC team. Fireworks were reportedly being let off to create riot conditions.

The crash site remained shut off on Thursday afternoon to clear the debris. A spokesman from the fire brigade told the Tagesspiegel that they had not ruled out a risk of fire, “because kerosine is leaking from the machines.”