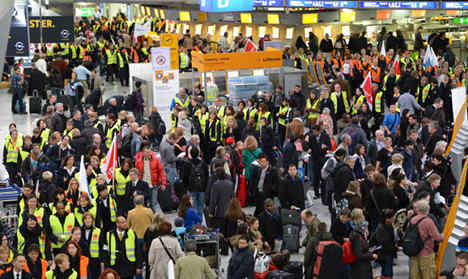 In Berlin, cabin staff are set to walk out during the morning and cancellations should also affect Cologne/Bonn airport to a lesser extent.

As organized warning strikes, Verdi said that staff should be back at work by midday.

The airline, Germany’s largest, cancelled over 700 flights – the majority of which were either domestic or European. Long haul flights were not affected. Passengers who were supposed to be travelling should, Lufthansa said on its website, check ahead before heading to the airport.

Frankfurt airport was, a Verdi spokesman said, relatively calm as most passengers had received warning beforehand that their flights would not be leaving.

Discussions will take place on Friday between Lufthansa and Verdi – which is pushing for 5.2 percent more pay for the 33,000 cabin and ground staff.

So far, the airline has not offered more money and even said it would like to increase its working week by an hour.