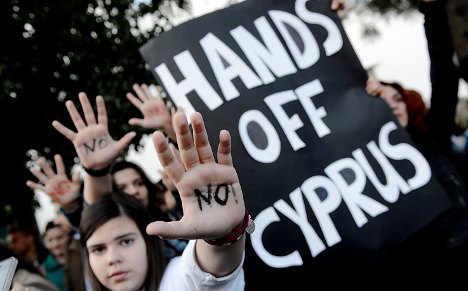 “The chancellor once again emphasised that the negotiations are to be conducted only with the Troika,” she added, referring to the term used for the European Union, the European Central Bank and the International Monetary Fund.

The comment was made as the Cypriot finance minister headed to Moscow after an explosion of anger in Russia at the EU bailout deal for the island that could see Russian investors lose billions of euros.

In exchange for a €10 billion ($13 billion) bailout for debt-laden Cyprus agreed by EU leaders on Saturday, a controversial levy will be slapped on bank savings. The move has raised widespread anger in Cyprus, but also in Russia, where investors have placed vast amounts of cash in the island’s banks.

The German spokeswoman also declined to say whether the phone conversation

Cyprus Tuesday was reviewing its bailout package ahead of a scheduled parliamentary vote on the deal after the eurozone urged a rethink on the controversial levy on bank deposits.

But German Finance Minister Wolfgang Schäuble said on Tuesday that investors who placed their money in Cyprus in order to pay less tax should shoulder the risks when it comes to a bailout.

“Whoever invests their money in a country where they pay less tax, and perhaps where there is less supervision, shoulders the risk when that country’s banks are no longer solvent. That’s a fact,” Schäuble said in an interview on German public radio Deutschlandfunk.

If investors from Russia and elsewhere were not to foot the bill for the bailout, then it would fall to European taxpayers to pay for the billions of foreign investment in Cyprus, Schäuble said. “That would be irresponsible,” he said.

The minister also said that the Cyprus economic model, which used low tax rates to attract foreign money, was “bankrupt”.

The eurozone has told debt-hit Cyprus to revise the controversial levy on bank deposits to allow small savers to escape the tax amid a public outcry and fears of a bank run.

The statement from eurozone finance ministers came Monday after Cyprus baulked at putting the bailout plans to a parliamentary vote, as the growing uncertainty forced a prolonged closure of the island’s banks.

Cyprus shut its banks until at least Thursday and delayed a parliamentary vote on the package until Tuesday after large queues formed at ATMs on the island.