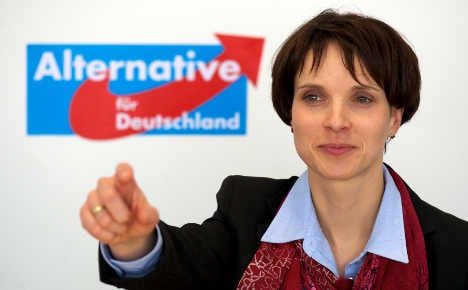 With more than one in four Germans in a recent poll saying they would consider voting for an anti-euro party, the new group, “Alternative for Germany,” is gearing up for a major push ahead of elections on September 22.

“We are constantly getting calls, letters or emails from people who want to

join or want to support us,” said businesswoman Frauke Petry, head of communications at the party, which campaigns for Germany to leave the euro.

The party counts “more than 2,000 members and donors,” a drop in the ocean compared to the nearly half a million Germans who are members of the two biggest parties, Merkel’s conservatives and the opposition Social Democrats.

Its main aim now is to form regional groups in Germany’s 16 states before holding a founding congress on April 14 in Berlin to elect its candidates for the vote in September.

Their first public meeting, in a well-to-do suburb of Frankfurt, the eurozone’s financial capital and home to the European Central Bank, attracted some 1,200 people to listen to speeches about the disadvantages of the euro.

In the crowd were a large number of pensioners in their Sunday best, greying professors and liberal professionals, united in their belief that Germany has paid too much to keep the 17-nation eurozone afloat. The party’s creation has roused a great deal of interest in the media both within Germany and abroad and is supported by Hans-Olaf Henkel, a former head of the BDI, the country’s leading industry federation.

They are encouraged by a recent survey in Focus magazine showing that 26 percent of Germans would consider voting for an anti-euro party. This figure rises to 40 percent among those aged between 40 and 49.

The majority of the supporters would currently vote for Merkel’s Christian Democratic Union (CDU) or junior coalition partners, the pro-business Free Democrats (FDP), explained Petry. And the “Alternative for Germany” has not gone unnoticed at the senior echelons of the CDU.

“I take all political competitors seriously,” said the head of the CDU parliamentary group Volker Kauder. “We need to explain to people that Germany’s prosperity depends in large part on that of Europe … any alternative to having the euro would be considerably worse for Germany,” said Kauder. He judged the new party to be “institutionalised fear of the future.”

Andreas Busch, a political science professor at Göttingen University said there was a “void” when it came to eurosceptic politicians in the German system with all major parties being strongly pro-euro.

However, he said that “all those who have attempted to fill this void have failed”, recalling the rise and fall of a “pro Deutschmark” party at the end of the 1990s.

Another expert, political scientist Simon Franzmann from the University of Düsseldorf, said that Germany’s relative prosperity at the moment would not help the new party’s cause.

The party “is campaigning on a purely economic topic but for the moment Germans are satisfied with the situation in the country and that compensates for their dissatisfaction vis-a-vis the euro,” said Franzmann.

Moreover, the way the polls are looking in Germany, a vote for this party might risk opening the door to a more leftist coalition, noted Franzmann, something supporters would want to avoid “at all costs.” “That’s why they will in any case vote for the CDU or the FDP.”

According to the latest polls, the CDU would win 40 percent of the vote if elections were held now but the FDP would scrape only five percent, meaning a grand coalition between the CDU and the SPD is still a possible outcome.