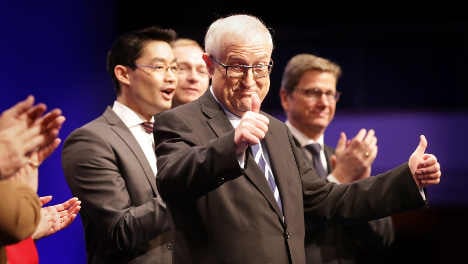 years ago to contribute to the costs of reunification and the economic development of the former East Germany.

The solidarity tax, known colloquially as “soli,” applies to all workers and businesses and has been the source of heated debate over the years.

Brüderle has called for the tax to be abolished once the so-called “solidarity pact,” runs out in 2019. “The solidarity tax is simply an extra tax,” he told Welt am Sonntag, adding that “people in eastern Germany are equally burdened by it.”

The FDP election manifesto, which is to be released later this weekend, states that the party’s aim is “to lift the burden of the working middle class.”

The FDP, who have been in coalition with Merkel’s conservative CDU party since 2009, are struggling to meet the five percent support needed to go into government.

Their performance under party leader Philipp Rösler and newly chosen top candidate Rainer Brüderle has become the source of much speculation as federal elections in September approach. Should they fail to meet the five percent mark, the CDU could have to enter into a coalition with the centre-left SPDs, as was the case between 2005 and 2009.

The FDP received a surprisingly high 14.6 percent of the vote in 2009, with the election slogan “more net from your gross.” However, the party has been severely punished in regional elections for failing to push through promised tax cuts.

Rainer Brüderle, known for his firey rhetoric, is hoping to attract voters with a renewed promise to cut taxes. Chancellor Angela Merkel, who wants to continue in coalition with the FDPs, will be keeping a keen eye on the party’s performance in opinion polls in the coming months.