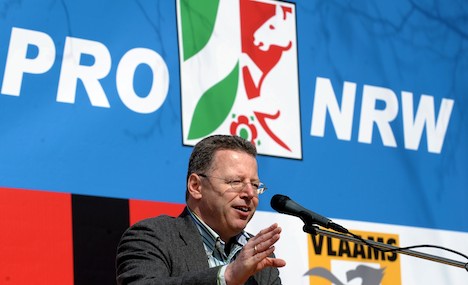 The authorities arrested four members of a radical Salafist group before they could murder Markus Beisicht, the head of the anti-Muslim far-right Pro NRW party.

The police apprehended two of the suspects in Leverkusen near Cologne, where they were apparently observing Beisicht. Two others were arrested in Essen and Bonn, where the police discovered ingredients to make explosives and a gun.

“The arrests prove that the security authorities are vigilant and take the threat from extremist Salafists very seriously,” said NRW Interior Minister Ralf Jäger, according the website of Der Spiegel.

The Bild newspaper reported that one of the arrested men was involved in a failed bomb attack at Bonn’s main train station on December 10. Although the explosive device was detonated, it did not go off.

Police planned to offer more details of the plot at a press conference later in the evening.

Beisicht and Pro NRW have been involved in violent clashes with Salafists over the past year.

Last May, violence broke out when 25 Pro NRW campaigners demonstrated using offensive caricatures of Islam’s Prophet Mohammed. These campaigners then clashed with members of the Salafist community in the western town of Solingen who had gathered for a counter-demonstration.

Police said at the time that Salafists tried to break through a police barricade, brandishing rocks and sticks.

Hans-Peter Friedrich, Germany’s federal interior minister, said there was no connection to a series of raids against Salafist groups earlier on Wednesday.