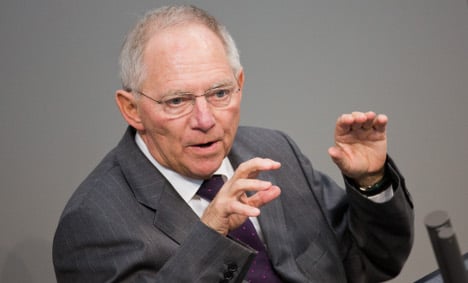 The structural federal budget – excluding one-off items and the effects of the economic cycle – would be balanced in 2014, the Finance Ministry said.

The budget nevertheless foresees a deficit of €6.4 billion ($8.3 billion) in the total federal budget of 296.9 billion euros next year, mainly owing to German payments into the European bailout fund.

“At €6.4 billion, new borrowing is at its lowest level for 40 years,” the Finance Ministry said in a statement.

In 2015, 2016 and 2017, the books would be balanced entirely, according to the draft budget, with no new borrowing required by Europe’s top economy.

“Growth and (budgetary) consolidation are not mutually exclusive but rather they reinforce each other,” Finance Minister Wolfgang Schäuble emphasised.

“The confidence that solid state finances brings is the pre-condition for sustainable growth,” he added.

Germany had drawn “the right lessons from the European debt crisis” and is fulfilling its role as “a stability anchor in Europe,” added the minister.

Co-presenting the budget, Economy Minister Philipp Rösler said: “In all humility, I think this is a historic step.”

The federal budget deficit amounted to more than €44 billion in 2010, when Germany was recovering from one of its worst recessions since World War II.

The budget comprises just spending at a federal level. The wider public deficit, which includes regional and local administrations, is used to calculate whether countries are abiding by European rules.

In 2012, Germany registered a surplus of 0.1 percent of total gross domestic product (GDP) on this measure, according to a provisional figure published in mid-January.

European Union rules state countries in the eurozone may not run a public deficit higher than three percent of GDP, and are supposed to work towards a balance, and even a surplus in times of economic growth.