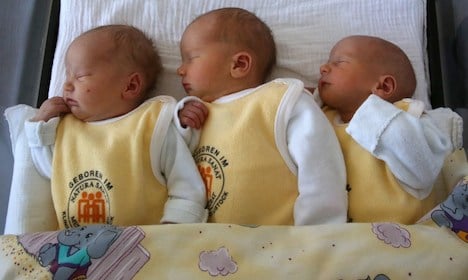 Doctors delivered two healthy girls and a boy by caesarean section in the 38th week of pregnancy. Triplets normally are delivered around the 30th week while single pregnancies last around 40 weeks.

“The children are as healthy as can be,” said a doctor from the Rostock clinic where the trio were born last Friday.

Emma and Hermine are identical twins weighing in at 2,550 and 2,650 grammes respectively. Their brother Ben tipped the scales at 2,010 grammes.

The 41-year-old mother Heike, who had two artificially inseminated eggs implanted, was described as tall and strong. She even came to the hospital on her own the day before the birth.

Three gynaecologists, three midwives, four paediatricians, four nurses and two anaesthesiologists helped deliver the three babies, who were born within four minutes of each other.

They will soon get to go home to their two older sisters aged 12 and four.

“Family and friends are all home gearing up to help out,” said their still visibly exhausted mother.