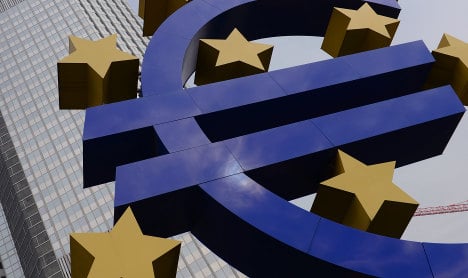 An emerging anti-euro party could attract up to 26 percent of voters, the results from polling company Emnid published in Focus magazine on Monday, showed. The most likely supporters were aged between 40 and 49, with four out of ten of voters of this group wanting to see Germany leave the euro.

The anti-euro feeling is to be found in all political parties, the poll suggested, with 17 percent of Chancellor Angela Merkel’s conservative Christian Democratic Union (CDU) supporters expressing the view that Germany should leave the common currency. Nearly a third of those who support coalition partner the Free Democratic Party, would also be tempted by an anti-euro party.

Of those identifying themselves as Social Democratic Party supporters, 15 percent said they would be tempted by an anti-euro party, while 27 percent of Green supports might follow suit. Those most likely to vote that way were Left party supporters, 57 percent of whom told pollsters they supported a German exit from the euro.

And even if this support does not immediately translate into actual votes, it should not be ignored, said Emnid boss Klaus-Peter Schöppner.

“With 26 percent we’re talking about a relatively high number. It’s a clear indication that there is potential for a new protest party here in Germany,” he told Focus.

The newly-established “Alternative for Germany” (AfD) group plans to harvest this resentment against the costs to Germany of the euro and is confident of gathering the 2,000 or more signatures in each of Germany’s 16 states needed to become a recognised party by mid-April.

AfD founder Bernd Lucke, previously a long-term member of the CDU, told Focus the task was not “doing his head in”. His supporters include Joachim Starbatty, author of a book called Crime Scene Euro, and Stefan Homburg, professor of public finance at Hannover University.

Although a self-professed ardent European, 83-year-old Starbatty has argued that the euro did more to drive Europeans apart than it did to bind them together.

Another party seeking support from voters disillusioned with mainstream politics is the Freie Wähler or Free Voters party, which portrays itself as an alternative to the euro-saving rhetoric of most parties, and enjoys popularity in southern regions.

Frontrunner Stephan Werhahn, grandson of Germany’s first chancellor Konrad Adenauer was a member of the CDU, which his grandfather co-founded, until last year when he left in protest against introduction of the European Stability Mechanism.

But far from contemplating defection, most known euro-sceptics within mainstream parties have been working hard to drum up support among their colleagues.

CDU members Wolfgang Bosbach, Klaus-Peter Willsch and Peter Gauweiler from the Bavarian sister party Christian Social Union, as well as Frank Schäffler from the FDP have been fighting to build majorities within their parties against what they deem bad government policy.

“All opposed to this should join the FDP and change the majority there,” Schäffler told Focus. “Our members’ vote against the ESM was only 2,000 short of changing the party majority.”

He said he did not believe the anti-euro parties would achieve much. “A party must offer more than simple protest against a singular issue,” he said.