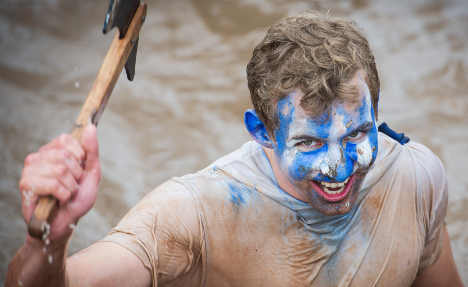 Many of the more than 2,500 participants painted their faces – and other parts of their bodies – blue, and dressed up in kilts to take part in the Braveheart Battle in Münnerstadt near Schweinfurt.

Former soldier Joachim von Hippel dreamt up the torturous circuit and named it after the 1995 Mel Gibson film, saying there was no German figure as tough as the Scotsman Wallace.

“I watched the film when it first came out and I’ve watched it several times since,” he told The Local.

“There is no figure in German history who’s on the same level as William Wallace and that’s why I used the name Braveheart to motivate the participants,” he said.

Some of the hardest – or perhaps foolhardy – participants ran wearing nothing but sneakers and swimming trunks or kilts. Others prefer slightly warmer wetsuits.

Michael Wiener, 28, was there on Sunday for the second time – with 21 friends – and said it was more difficult this year than last.

“It was hell”, he said, “This year, the first 10 kilometres were tougher than the entire Braveheart Battle course last year.” His friend Marcel Späth agreed,” I ran a marathon in October. But this was much worse.”

The first time von Hippel staged the race four years ago, 600 people took on the challenge. This year 2,560 people ran, with 97 percent making it to the end. Most were men, but 214 women also made it round the course.

“I’m just going to lay here. I don’t care anymore,” said one participant after falling into the mud. “The pain goes, but pride stays!” shouted a woman from the crowd to egg him on.

“We’re seeing a boom of such races right now,” said Ursula Schemm from the race’s management.

“People enjoy doing something together, performing and being challenged at the same time.”

More than two thirds of the runners participated as teams, cheered on by around 20,000 onlookers.

Ronald Zocher from Thuringia came to cheer a friend who was a first time runner. “What they’re all achieving here is really tremendous,” he said.