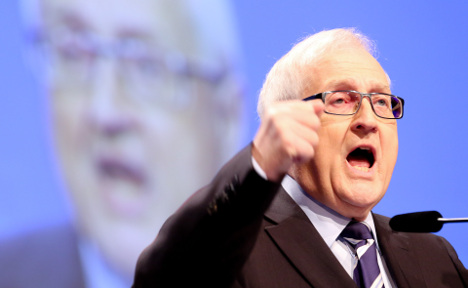 The pro-business Free Democrats (FDP), which has governed with Merkel’s conservative Christian Democratic Union since 2009, selected Rainer Brüderle, 67, to represent them in the September 22 vote in Europe’s top economy.

He was responsible for sparking a national debate about sexism in Germany when a 29-year-old female reporter wrote that he leered at her breasts and told her, “you could also fill out a dirndl,” Bavaria’s low-cut dress for women.

But this was not addressed at the FDP meeting – Brüderle was focussed on trying to rally his toops.

“People want a strong voice for freedom. The chance is there for us. We should use it and we want to use it,” said Brüderle during a 75-minute speech at the party conference in Berlin.

“I know you will all fight with me,” he told the 600 delegates, who responded by giving him a five-minute standing ovation. “Let’s go into battle,” he shouted, to cheers and applause.

There was no formal vote to elect Brüderle, who was economy minister under Merkel between October 2009 and May 2011, but a show of hands suggested he

had considerable backing from the party faithful.

Brüderle has a tough scrap ahead of him, as the party struggles to turn around its fortunes following years of internal bickering and plunging support.

The FDP was the surprise package in the 2009 elections, polling 14.6 percent and giving Merkel the combined votes needed to form a viable government.

But following a failure to push through promised tax cuts and a brief flirtation with a more eurosceptic line, supporters left in droves and the party suffered a series of catastrophic regional election defeats. It ditched its then leader Guido Westerwelle, who nonetheless hung onto his job as Foreign Minister, yet failed to revive poll figures.

The party has consistently failed to score the five percent required to win seats in the Bundestag lower house of parliament and would be cast into political oblivion if this performance were repeated in September.

The latest survey, published on Sunday by polling institute Emnid for the Bild am Sonntag weekly newspaper, put the FDP at four percent.

The election reverses took their poll on the party’s leaders with Westerwelle stepping down as party head, to be replaced by Philipp Rösler, currently economy minister and vice-chancellor in Merkel’s cabinet.

But the 40-year-old also came under heavy fire with the party languishing in the polls and eventually stepped aside as the FDP chancellor candidate although remained party head.

Rösler was re-elected party leader on Saturday with 85.7 percent of the vote.

The FDP’s troubles are also a headache for Merkel.

She has repeatedly stated that she wants to continue in government with the FDP but their weakness may yet force her to negotiate with other parties to form a workable coalition.

Both Merkel and her party remain highly popular in Germany and polls show her conservatives enjoy a sizeable lead over the nearest rivals, the centre-left Social Democrats (SPD).

However, if the FDP is unable to turn its fortunes around, analysts say she could yet be forced into another so-called “Grand Coalition” with the SPD, like that which governed Germany between 2005 and 2009.