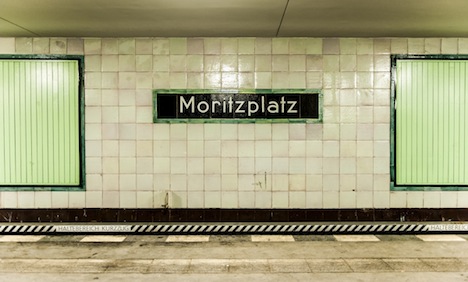 More than 500 million passengers pass through the 173 stations of Berlin’s U-Bahn metro each year. Opened in 1902, it is the most extensive underground system in Germany. When connections were severed along the East-West city border in the 1960s, many stations ended up visually reflecting the areas they served.

With this in mind, Australian photographer Kate Seabrook took up the challenge of compiling a photo collection of the entire network. Starting in February 2012, she travelled the lines with a camera, getting off at each station to capture the scene before the next train arrived.

“I normally took three to 15 photos to get the shot, needing around two minutes. The challenge was getting usable shots in the window of time between one train and the next without disturbing passengers going about daily business,” she told The Local.

Click here for a photo gallery of the U8 line

Despite initial concerns from husband Simon, who accompanied her on every trip, Kate said she experienced no trouble.

“A couple of people requested directions, a drunk guy asked me to take photos of him… Security questioned me once. They asked what I’m doing and I just said ‘I’m taking photos of the architecture, I find it interesting’. They left me alone.”

The seed, Seabrook revealed, was planted during a Paris holiday some years ago, when a tourist snap of Abbesses metro station drew her to minimalist architecture.

Impressed with Berlin’s underground upon arriving in 2011, she saw the challenge of documenting it as a way to familiarize herself with her new urban surroundings.

“Berliners don’t fully appreciate their daily commute. I wanted to show them how amazing the U-Bahn is,” she said. “I researched the idea beforehand as I wanted to be sure no-one had done it before.”

She discovered there was a “Miss U-Bahn” pageant with the outfits of contestants matching various stations and a book containing photographic highlights of the network.

Yet a photo collection picturing each line from end to end was something she did not come across.

“As far as I know, no one has documented it in this manner,” she said.

One striking pattern she noticed in the process was the way a station’s appearance matched that of the local area.

“Occasionally stations reflect their surroundings. The station Rohrdamm (Rohr means ‘pipe’) has a design which makes clear it’s an industrial area. Heidelberger Platz, located in affluent Wilmersdorf and adorned with cathedral-like Gothic arches, is another example.”

The contrast between what was once West and East Berlin is also noticeable in places.

“On the whole, stations in the former East are more functional and simpler in appearance. Wealthier areas seem to have gone to greater lengths designing and preserving existing stations,” Seabrook said.

Before arriving in Germany, Seabrook worked for a photography business in Melbourne. She and her husband fancied the challenge of a new culture and had been considering a move to Europe for some years.

Berlin seemed to offer the right balance. “We wanted a bit of a culture shock, but not too much,” she said.

Knowledge of German is nevertheless a vital attribute, Seabrook said: “I think it’s difficult to get work here if you don’t speak the language.”

Asked about future plans for the project, Seabrook said she hoped to turn the series into a book.

“It’s important the photos stay as a set and a book would certainly make that possible,” she said.

The attention the project has attracted inspired her to repeat the feat in other European cities, with the Nuremberg U-Bahn, Germany’s newest, and Prague metro currently topping her list. She has no plans to cover Berlin’s commuter rail system, the S-Bahn.

“People ask if I’ll shoot the S-Bahn but it’s not a manageable, contained project. Lines are long and station architecture becomes very uniform in the outskirts,” Seabrook said.

As someone better placed than most to comment on the famed efficiency of German transport, she admitted to being impressed.

“Ninety percent of the time trains turned up on the dot. Once I foolishly decided to shoot on a Sunday, however, which happened to fall after the coldest night of the year. It was minus 15 and the line had a significant portion above ground. The ten-minute wait felt like an hour!”

Her favourite station? She had to settle for two: Pankstraße, with its instantly recognizable “Octopus” font, and Konstanzer Straße, whose walls are streaked with a blinding blend of orange, yellow and black.