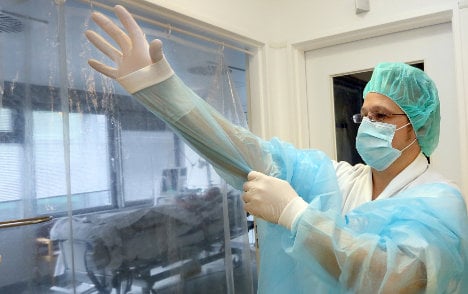 At least three infants have died of infection in the premature baby unit at a single hospital in Bremen since 2011, while around 30 deaths at the University Hospital in Leipzig are thought to have been caused by a multi-resistant pathogen. And germ infections at Berlin’s Charité hospital have also made the headlines recently.

Hospital staff underline that it is impossible to prevent every single infection. The bulk of hospital infections are caused by bacteria that occur naturally in the intestines, and are only dangerous when they enter the bloodstream. Hygiene measures are meant to prevent that.

The German Health Ministry estimates that between 400,000 and 600,000 patients contract an infection every year from medical treatment – and some 15,000 of these die. Some health experts think these estimates are much too low.

Hygiene awareness has grown at the Charité since last autumn, says Christoph Bührer, director of the hospital’s neonatology clinic, which has now bought a special washing machine for baby bed sheets and clothing.

Rooms that up until now were big enough for several incubators have now been converted into single rooms. “These are expensive, important measures that we would otherwise have to fight for,” says Bührer. “But now it’s become easier to get our way with the finance department.”

That loosening of the budget is no doubt down to the “killer bacteria” headlines that appeared last October. Though it was later found that the serratia bacteria found in several babies at the Charité was not responsible for the one death that occurred, the public concern was understandable – especially in light of the deaths in Bremen.

“Bacterial infections are part of everyday life in an intensive care unit,” said Bührer. He added that a serratia infection was relatively harmless, as it could be treated with antibiotics.

Much more dangerous are the multi-resistant Staphylococcus bacteria (MSRA), which do not react to antibiotics. One such infection occurred at the Charité at the end of February. A similar outbreak at the University Hospital Leipzig killed around 100 people.

Most of these types of infections happen through wound infections – a smaller proportion occur through throats and urinary tracts. “We estimate that about a third of these infections are avoidable,” says Petra Gastmeier, director of the Charité’s hygiene institute.

Klaus-Dieter Zastrow, hygiene specialist for the eight Berlin Vivantes clinics, thinks that too many hospitals make false economies with hygiene costs. “It’s amazing that a lot of hospitals don’t understand – good hygiene means they make more money,” he says. That’s because insurance companies don’t pay for every day that a patient stays in hospital over the average for a particular ailment.

If poor hygiene leads to an infection, the hospital often ends up paying for the extra treatment. “And good hygiene hardly costs any money,” claims Zastrow. “And the health insurers will pay for it.”

Zastrow thinks that there are as many as a million hospital infections every year, with 40,000 deaths. “The main reasons are uncertainty, lacking education, and human error. It’s a deadly combination,” he says. “These aren’t bacteria that stick to the walls in hospitals. They come from us. From the doctor, from the nurses, from visitors, and from the patients themselves.”

The rule is that nurses must change their protective clothing before going into each room, but that isn’t always possible. In part, this is down to budgeting. The Charité has had to cut more than 1,000 jobs in the past five years. Sometimes, a single nurse or carer on the night-shift is responsible for up to 31 patients.

“If ten of them are in single rooms, and then if someone falls or dies – in the stress of that I can understand if someone forgets to use the hand disinfectant,” says carer Stephan Gummert.