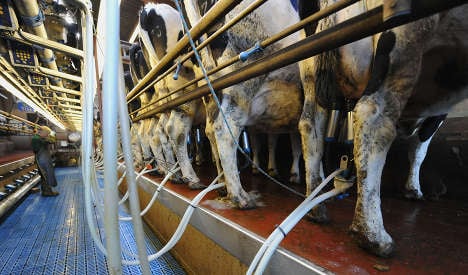 Before being pasteurised, milk from the farm had twice as much aflatoxin – produced by the Aspergillus species of mould – than national standards allow.

There was a possibility that the contaminated raw milk had already been sent to dairies for processing, the state Consumer Protection Ministry said. Until the milk has levels below 50 nanogrammes of aflatoxin per kilogramme of milk it may not be sold. Current levels were around 100 nanogrammes.

Milk from cows which have ingested aflatoxin – one of the strongest naturally occurring carcinogens – is “particularly dangerous,” said Udo Paschedag from Lower Saxony’s Agriculture Ministry.

At the weekend, hundreds of farms in Lower Saxony were banned from selling milk after the same fungus was discovered in feed from Serbia. Certain instances saw the raw milk containing 30 times the acceptable limit of aflatoxin.

The source was traced back to 10,000 tonnes of a Serbian shipment of contaminated maize which found its way into animal feed delivered to 3,560 farms in Lower Saxony, including 938 dairy farms.

The NRW farm obtained its livestock feed from a supplier in the Lower Rhine region, which had sold 200 tonnes of contaminated Serbian maize. Although this is not thought to be connected with the maize in circulation in Lower Saxony.

Aflatoxin-riddled feed was also identified in three other farms in NRW, the milk from which all fell just under the acceptable limit. Around 70 farms likely bought feed from the Lower Rhine supplier.