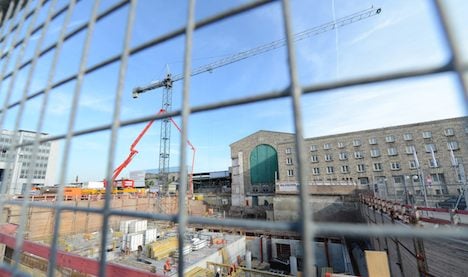 Deutsche Bahn’s supervisory board on Tuesday backed the contentious infrastructure project, even though it will now cost at least cost €6.5 billion – €2 billion more than originally planned.

Stuttgart 21 aims to create a futuristic underground station for the southwestern German city, but it has sparked violent protests and criticism that it is an unnecessary white elephant.

Deutsche Bahn chairman Rüdiger Grube, who believes abandoning the project would be more expensive than completing it, welcomed the board’s decision. But he now faces the task of convincing the city of Stuttgart and the state government of Baden-Württemberg to share the added costs.

Both the city and state have refused to do just that, saying Deutsche Bahn is responsible for Stuttgart 21’s ballooning price tag.

“The Bahn has to cover all extra costs, because it’s building it. It’s the duty of the Bahn and the federal government, not the state, to build functioning train stations,” said Baden-Württemberg’s state premier Winfried Kretschmann on Tuesday.

Those sentiments were echoed by Stuttgart’s mayor, Fritz Kuhn: “The city won’t pay any more money than what was already allocated.”

Both politicians belong to the centre-left Green party, which has been largely sceptical of Stuttgart 21 from the beginning. German Chancellor Angela Merkel, a member of the conservative Christian Democrats, has openly backed the rail project, potentially setting it up to be an election issue, when German voters go to the polls in September.

Deutsche Bahn boss Grube has already threatened to take the city and state authorities to court, in order to force them to help pick up the tab.

A survey last month showed that 54 percent of the people in Baden-Württemberg would like to see the project abandoned, despite a 2011 referendum and which showed a majority of nearly 59 percent behind the project.