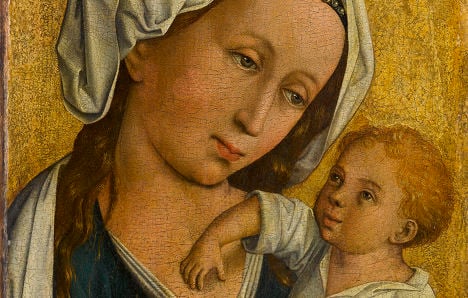 Concordia University in Montreal, acting on behalf of the executors of the estate of Max Stern (1904-1987), announced Staatsgalerie Stuttgart’s restitution of an early Northern Renaissance painting belonging to Stern.

Clarence Epstein, who leads the restitution project, received the painting at a ceremony at the Canadian embassy in Berlin. He was accompanied by Canadian Immigration Minister Jason Kenney.

The painting of the Virgin and Child, attributed to the Master of Flemalle (1375-1444), identified by historians as Robert Campin, was donated to the Stuttgart museum after World War II.

“They are highly praised and highly sought after works,” Epstein said. “And Campin was one of the most important painters of his time in Europe,” he added.

Since 2003, Concordia has sought to recover more than 400 paintings lost to Stern at the hands of the Nazis through a forced sale in 1937.

Stern himself shuttered his Düsseldorf gallery in December of that year, and fled to London before settling in Canada. While in London he was forced to liquidate even more paintings, including the Virgin and Child, in order to buy a German exit visa for his mother.

He would go on to become one of Canada’s most important art dealers and collectors. The bulk of his estate following his 1987 death was bequeathed to Concordia, McGill University in Montreal, and Hebrew University in Jerusalem.

The Stuttgart recovery comes on the 100th anniversary of the founding of the Stern Gallery in Dusseldorf by Max Stern’s father, Julius.

It is the tenth return in ten years for the restitution project, and its recovery is thanks to researchers at Staatsgalerie Stuttgart and the Holocaust Claims Processing Office of the New York State Department of Financial Services, which has taken an active role in pursuing Stern claims since the inception of the project.

“We uncovered very important archival documents that convinced the State of Baden-Württemberg that this claim was very solid,” explained Epstein.

“The documents helped researchers connect the work to a family that owned it just prior to Stern and proved that he was the owner” during the Nazi era, and how he lost it under duress even while he was not in Germany because he was being extorted for money by the (German) National Socialist government for the purpose of buying his mother out of Germany.

“So we now have the whole paper trail that was uncovered in the last two to three years.”

Epstein said German government funding for its museums to investigate the origins of their artworks was crucial too.

These earmarked monies, however, are insufficient “bearing in mind that we are in the heart of a country that was at the heart of this issue and so the chances of identifying problematic works is incredibly high in almost every museum in Germany,” he said.

“There is still a lot of work to be done with private museums in Germany,” he added. “We currently have about 40 paintings on our radar.”

Concordia president Alan Shepard said that “the most immediate challenge lies in encouraging a number of other museums currently in possession of Stern paintings to follow the lead of the Staatsgalerie.”