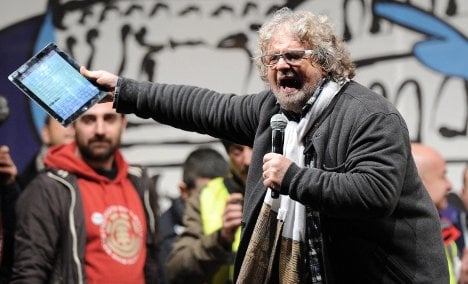 Echoing this, Germany’s Economy Minister and Vice Chancellor Philipp Rösler on Saturday urged Italians to stay the course laid out by the outgoing government under Mario Monti.

“Italy, as a major European economy, has a great responsibility. There is no alternative to the policy of structural reforms,” he told German weekly Focus. “I’m confident that those responsible in Italy recognize the importance of (preserving) stability.”

Italian-German relations took a nose-dive earlier in the week when Merkel’s gaffe-prone challenger from the opposition centre-left, Peer Steinbrück, said he was “downright appalled that two clowns won” Italy’s election.

Official figures this week showed Italy’s economy shrank by 2.4 percent last year and public debt rose to 127 percent of gross domestic product (GDP) from 120.8 percent in 2011 – the highest level in the eurozone after Greece.

“We are being crushed – not by the euro but by our debt,” Grillo told Focus. “When (public debt) interest payments reach €100 billion a year, we’re dead. There are no alternatives” to debt renegotiation, he added.

Grillo’s party has spooked Europe with its promise to hold a referendum on the euro and cancel Italy’s debts, prompting European leaders to urge Italy to stick to its fiscal commitments and form a government as soon as possible.

The comedian-turned-populist firebrand said he gave his country’s political system “only six months” before it collapsed and the state could no longer “pay pensions and public sector salaries.”

If the debt obligations didn’t change, Grillo said he would want his recession-struck country to leave the euro and return to the lira, the magazine said.

Klaus-Peter Willsch, a deputy from Merkel’s Christian Democratic Union (CDU), echoed Grillo’s sentiments on Friday and called for Italy to leave the euro if it could not stick to EU rules.

With Italy still scrambling to find a way out of the political impasse following last weekend’s elections, Grillo could become kingmaker after his rogue party drew many austerity-weary Italians to its ranks.

He has refused to form a coalition with Pier Luigi Bersani, whose centre-left party came out on top in the elections, nor with ex-premier Silvio Berlusconi’s conservatives, until his demands for changes to the political system are met.