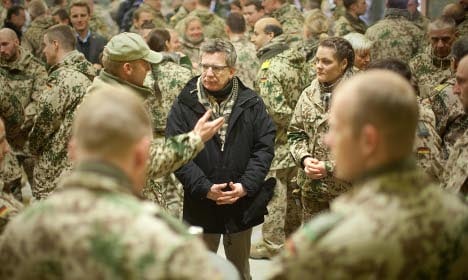 In comments printed in the Frankfurter Allgemeine Zeitung last weekend De Maizière offended German soldiers by suggesting they were addicted to praise.

“They have the understandable, but often exaggerated desire for appreciation. They have perhaps become practically addicted to it,” de Maizière told the paper – an accusation which predictably did not go down well with the German military.

“German soldiers do not crave for anything – neither recognition nor anything else,” said Ulrich Kirsch, head of the Bundeswehr Association on Monday.

If soldiers had a greater need for respect and recognition, it was because for a long time they had received too little of these things, added Kirsch.

But while the minister admitted that his tone may have been a bit off, he stood by his original message that that many soldiers did not register praise from the public, and were desperate for approval.

“As a boss you have to be allowed to publicly say a critical word once in a while,” the minister said.

“Again and again I see that high praise from outside is not really registered inside the Bundeswehr. I just wanted to call attention to that,” he said.