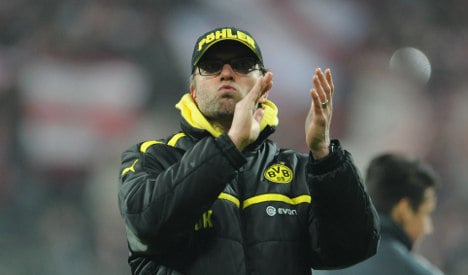 Dortmund have won the last two Bundesliga titles, but are second and 17 points behind leaders Bayern in the current campaign, having also lost 1-0 in Munich on Wednesday in the quarter-finals of the German Cup.

Klopp went on the offensive after the defeat when he accused Bayern of copying his team’s playing style.

“At the moment, it is like what the Chinese are doing in industry: they look at what others do, copy them, and then with more money and players follow a similar path,” said Klopp. “And then after that, you’re better again.”

Relations between Klopp and Heynckes have been cordial for the last two seasons, but Heynckes was clearly irritated by his Dortmund counterpart.

“Bayern have been round a bit longer than Jürgen Klopp has been a coach and we have always had our own style of play,” said the 67-year-old.

“It’s important to show how big you are in both defeat and victory,” he added after Bayern broke their six-match winless streak against Dortmund in the cup game.

“Bayern Munich is certainly not a club who have to tell us how to show grace in defeat, because they themselves have not always had a monopoly on that department,” he said.

“What Jürgen Klopp has said is absolutely correct. Dortmund certainly don’t need to take a lecture from Bayern.”

But Heynckes, who won the Champions League title as Real Madrid coach in 1998, said Klopp, who is 22 years his junior, should change his tune.

“If Jürgen at sometime enjoys the chance to coach Bayern Munich or Real Madrid, he will realise what it means to do so and that you exist in a completely different world,” said Heynckes.

“I don’t want to tread on Borussia Dortmund’s toes, they are a great team, but when you are at one of the big clubs, you have a Herculean task ahead of you in every department.

“This team didn’t just fall into Bayern’s lap, there has been a process you have to follow. We didn’t just take a bunch of your players and implement a plan (like Dortmund),” he said.

Heynckes said Klopp has “always acted in a fair manner” towards him and even offered an excuse for the Dortmund trainer’s comments.

“If he is there with his small group of Dortmund journalists, these things can slip out,” offered Heynckes. “I don’t put much value on what he said.”

With Bayern facing Hoffenheim on Sunday in the Bundesliga, Heynckes has said it is “back to business” in their quest for the first title since May 2010.

“We’re still hungry for success and will not let up in the league,” said Heynckes. “We know that we must maintain the level, perhaps even improve.”