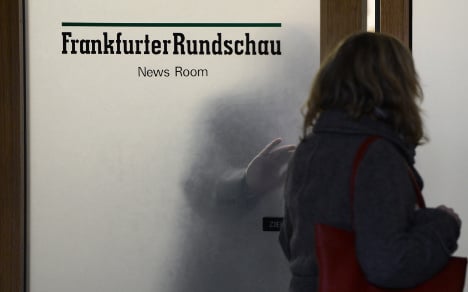 A contract was signed on Thursday morning, after the cartel office gave its permission on Wednesday, securing a future for the broke newspaper.

A separate company is being established, which will be majority owned by the company which owns the FAZ, while the rest will be split between the FAZ itself and original owners of the Frankfurter Rundschau, the Karl-Gerold Foundation.

But just 28 Frankfurter Rundschau journalists will be kept on, while more than 400 workers will lose their positions. Most of these currently work in the printing centre as well as in the editorial offices. All non-central offices in the Frankfurt region will be closed.

Those journalists who remain will focus on producing regional stories, aided by a regional news wire service. The pages which carry politics, finance and international stories will continue to be produced by the Berliner Zeitung newspaper until the new, slimmed-down company establishes its own capability to do so. The current editor Arnd Festerling will continue to lead the paper.

Yet the liberal Frankfurter Rundschau could sit oddly as a possession of the FAZ, known as a fiercely conservative paper. Yet FAZ manager Tobias Trevisan said, “As an independent voice, the Frankfurter Rundschau should also contribute significantly to the diversity of opinion in the future.”

The Frankfurter Rundschau workers’ council said on Wednesday it was in part satisfied with the result, but added it was not a happy day when hundreds of jobs would be lost.

The Financial Times Deutschland closed in December while the Nuremberg-based Abendzeitung was closed last September.

News agency DAPD also applied for insolvency in October 2012, while jobs are due to be cut at the Berliner Verlag newspaper group which publishes the Berliner Zeitung and the Berliner Kurier.