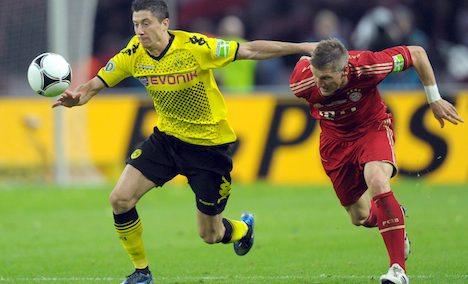 “For them, it’s a perfect season, for us it is like a Champions League away game,” said Dortmund coach Jürgen Klopp with Bayern a commanding 17 points clear at the top of the Bundesliga, with Borussia second in the league.

“We know that we are one of the few clubs on the planet who can beat Bayern. We have ambitions in this competition, but we need a good performance. You can’t beat Bayern by playing at just 98 percent.”

The match at Munich’s Allianz Arena is the plum tie of the cup quarter-finals with seemingly unstoppable Bayern up against last season’s domestic double winners Dortmund.

“These are the two best teams in Germany. I reckon the whole nation is looking forward to it – and so are we,” said Bayern captain Philipp Lahm.

Having hammered Bayern 5-2 in last May’s German Cup final, when Poland striker Robert Lewandowski netted a hat-trick, Dortmund have plenty of experience of beating their Bavarian rivals in recent years.

Bayern have not beaten Dortmund in a league or cup match since February 2010, although they did enjoy a 2-1 Supercup final win in August over Borussia in a pre-season warm-up for the Bundesliga’s top sides.

“Three years ago, we still had to scroll through the history books to see when we last won against Bayern,” quipped Klopp with both Bayern and Dortmund in the last 16 of the Champions League.

“Now we have noticed that the respect from Bayern has increased towards us.”

Lahm, Dutch wing Arjen Robben and Brazil centre-back Dante were also all given Monday off by Heynckes to rest up for the match.

“We have huge ambitions in the cup and are highly motivated,” said Heynckes, with Bayern last having won a title in May 2010 and are on course for a historic treble. “We are playing at home, we are self confident and we are playing football at an extremely high level. So we are optimistic.”

Bayern will be without France wing Franck Ribery, who is suspended after a red card in December’s previous round, while Spain midfielder Javi Martinez is expected to be fit despite suffering a light groin injury against Bremen.

With all due respect to the other teams in the quarter-finals, Wednesday night’s winner will become the odds on favourite to win the German Cup final at Berlin’s Olympic Stadium on June 1.