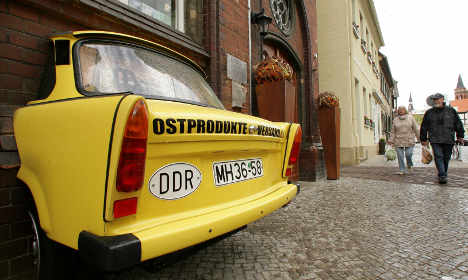 Nearly 25 years after the fall of the Berlin Wall, certain aspects of East Germany lives on for many former citizens, in the form of egg-cups, cleaning products and jars of Spreewald gherkins.

The Ostprodukte Versand dispatch centre in Tangermüde, Saxony-Anhalt, stocks German Democratic Republic (GDR) products not just to look at, but also to actively consume or use.

Bright blue and red scarves of the East German Pioneers youth movement wait in cardboard boxes along with ATA scrubbing powder, hen shaped egg-cups and Mekorna baby food, to be shipped off to customers pining for everyday GDR goods.

Owner Torsten Klipp also runs a GDR department store in Tangermüde’s historic old city. “The customers also need to be able to see, smell and touch [the products],” he said.

The East German Sandman, a favourite from the children’s TV sits in the store display window with his friends. Half of a bright yellow Trabant car has long been a feature of the brick façade.

Every day in the shop, customers can be heard saying “we used to have this,” a phenomenon known as “eastern nostalgia,” or Ostalgie in German.

“People unconsciously associate something with the products,” said Marko Sarstedt, a marketing expert at the Otto-von-Guericke University in Magdeburg.

Finding GDR products attractive is an automatic response rooted in childhood experiences, he said. “The most important influences are completed by the age of seven,” he added. The brands that stood on supermarket shelves back then are seen as somehow trustworthy.

“Anyone who buys these products is also rebelling a little against the rest of the brands on the supermarket shelves, to which a bland flavour of homogeneity clings,” said Sarstedt.

Majority of GDR goods were discontinued not long after the fall of the Berlin wall, outstripped by a new flood of hip and colourful bands of the West. Yet a few of years after German reunification, customers began to hanker after the old products of the East.

“I always wanted to offer as wide a range of products as possible,” says Klipp. The online shop now offers 1,000 products and has 100,000 buyers in the customer database, with every tenth order placed outside the country.

As for the rest of the clientele, orders from the former East and former West Germany tend to balance each other out, said Klipp. He often ships entire product lines to major supermarket chains or other distributors.

He has redeveloped private brands and had them protected under EU product laws. “It’s all about developing a trend further and being attractive to younger people,” he said.

That is why, for example, Klipp has updated the famous blue, yellow and white hen-shaped egg-cups for modern times, now exclusively offering them in the black, red and gold of the German flag. And it all seems to be paying off.

Klipp said business had been up every year since he opened in a room in his flat in 2003. Last year, revenues were up 11 percent to a total of €1.2 million and he employed 12 people.

He now lives in a former brewery, which also houses his office and warehouse, complete with a bust of Lenin in the hallway to greet visitors as they enter.