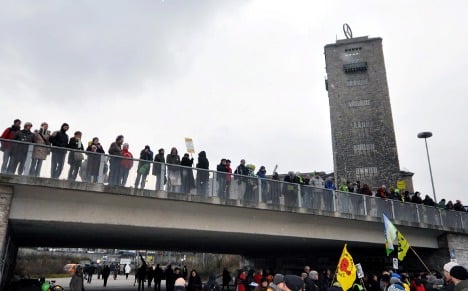 Protestors march at the weekend against Stuttgart 21. Photo: DPA

Thousands again took to the streets of Stuttgart, Baden-Württemberg at the weekend to protest against the billion-euro building project known as Stuttgart 21.

They want politicians to scrap plans to make the station, which is currently the end of the line, a through-route, and for a simple and cheaper modernisation instead.

A poll also this week showed that 54 percent of the people in the state would like to see the project abandoned, despite a 2011 referendum and which showed a majority of nearly 59 percent behind the project.

But after it was revealed in December that the initial budget was set to rise by more than a billion euros to €5.5 billion, some locals seem to have had a change of heart.

A parliamentary committee is due to hear from Federal Transport Minister Peter Ramsauer, Rüdiger Grube, head of Deutsche Bahn, the state-owned rail company responsible for the project, and others involved. They are due to explain why the project has gone so over budget.

“Considering the now-known billions of euros of increased cost and the disastrous communication of the Bahn, I can certainly understand that the poll showed a change of heart against the Stuttgart 21 project,” he said.

And although he said his Green-led coalition with the Social Democrats was not considering stopping the project, he said it had a constructively critical view of its progress.

Ramsauer also said on Tuesday he thought the project should continue despite the huge increase in costs.

“At the moment it looks as if the continuation, with minimization of foreseeable costs, would be the most sensible way forward,” he told public television ARD show Morgenmagazin.

“The question is not whether one can go back to zero, because that is completely impossible.” The point was now to figure how to get the best resolution for the transport problems of the Stuttgart area, he said.