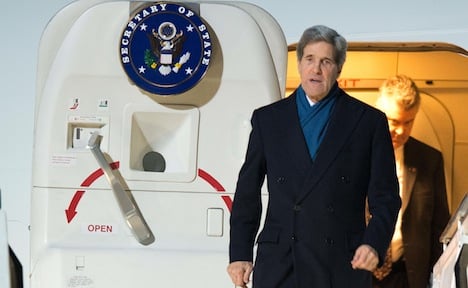 But long before US President Barack Obama appointed him America’s top diplomat, Kerry was gaining his first practical foreign policy experiences in Berlin.

Richard Kerry and his wife Rosemary had moved there in 1954, taking young John for two years to the front lines of the Cold War.

His dad, at the time a US diplomat in the divided city, was not pleased to hear that his son had taken off by himself to discover the Soviet sector and promptly grounded him for venturing into enemy territory.

“It was a triggering period of my life,” Kerry told the Washington Post during his unsuccessful run for President in 2004. “I became profoundly intrigued by global confrontation.”

Kerry was 11 years old when his father became a legal adviser to US high commissioner James B. Conant, who supervised West Germany’s development after the collapse of Nazi rule in 1945.

Heavily scarred by the World War II, Berlin was the epicenter of growing tensions between the West and the Soviet Union which had attempted to block all Western access to the city in 1948, precipitating the creation of two German states.

“I have unforgettable memories of being a kid mesmerized by the British, French and American troops, each of them guarding their own part of the city, and Russians standing guard on that stark line separating East from West,” Kerry recalled in his speech at the Democratic Convention in 2004.

According to the Washington Post, a family outing on a Berlin lake ended in panic when their sailboat drifted toward the Russian-patrolled shore.

But with the Berlin Wall not yet built, the Iron Curtain remained permeable. Cycling past bombed-out buildings and checkpoints, young John Kerry one day entered the forbidden Eastern part of the city.

“My dad was not thrilled,” he told Time magazine.

“He explained to me that I could have [caused] an international incident. I think he took my passport. I think I got grounded – passport grounded.”

But today Kerry values the experience.

“It was fun, it was an adventure,” he said according to a biography by reporters of the Boston Globe.

“I remember [seeing] Hitler’s bunker distinctively. My bike was sort of my great escape from parents and rules and all those things.”

Kerry’s parents decided to send their son off to a boarding school in Switzerland. Each time he came to see them in Berlin, he had to travel through communist East Germany on a special train with window shades preventing any contact with the local population.

“I actually noticed a very perceptible difference – the darkness, the lack of automobiles, the dark clothes,” he told Time magazine about his impressions of Eastern Germany. “It just seemed bleak. And I sensed the foreboding unwelcomeness to it.”

When Kerry’s parents left Berlin in 1956, he transferred to a boarding school in the United States. But the memories of the Cold War hotspot “stayed with me for a lifetime,” he said at the Democratic Convention in 2004.

“I saw how different life was on different sides of the same city. I saw the fear in the eyes of people who were not free. I saw the gratitude of people toward the United States for all that we had done … I learned what it meant to be America at our best.”

The new US secretary of state also refers to the time in Berlin when he talks about his appreciation for the work of American diplomats.

“When my father served in Berlin after World War II, I remember my mother sometimes looking at the clock nervously in the evening when he was late coming home for dinner in a city where troops guarded the line between East and West and the rubble of war was still very fresh,” he said in December at a Senate hearing on the deadly attack against the US consulate in Benghazi.

“But my father knew that what he was doing was worth whatever the risk might have been. And so do the Foreign Service personnel that we send all over the world today.”