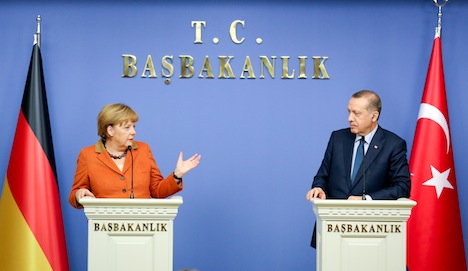 “We are going through an open-ended negotiation process… Although I have reservations on full membership, I certainly want to keep the talks on track,” Merkel told a joint news conference in Ankara with Turkish Prime Minister Recep Tayyip Erdogan.

The chancellor also said that she was in favour of opening a new chapter among the 35 in the body of EU law that Turkey has to complete before the bloc’s members can make a decision on full membership.

“First of all it will be good to open one chapter and then it will proceed step by step,” said Merkel.

Merkel however urged Turkey to implement the Ankara protocol to extend a customs union agreement to internationally recognised Cyprus, which joined the EU in 2004.

“Otherwise we won’t be able to keep opening chapters,” she said in translated remarks.

Turkey has refused to implement the protocol to open its air and sea ports to EU-member Cyprus until the Union moves on its pledge to ease the international isolation of the island’s breakaway Turkish-held north.

Turkey’s stance prompted the EU in 2006 to freeze eight of the 35 chapters in the accession process. Thirteen have since been opened to keep the talks alive.

Germany is one of the EU heavyweights, along with France, opposed to Turkey’s membership in the 27-nation bloc and has instead offered “privileged partnership,” a tailored version that falls short of Ankara’s aspirations.

Merkel also raised the issue of jailed journalists in Turkey and asked Ankara to create an environment where “journalists can work freely.”

Turkey frequently comes under fire for the record number journalists it holds behind bars, severely tarnishing its image as a candidate nation.

Erdogan however said the number of journalists jailed for their profession were fewer than the “fingers of a hand,” and claimed many were jailed for illegal activities, including robbery and man slaughter.

Germany has not vetoed any of the negotiating chapters of the EU law — which cover human rights, economic, environmental and other issues — unlike France, which blocked five under right-wing former President Nicolas Sarkozy.

“Chancellor Merkel also has hesitations about Turkey’s membership to the EU but I have to give her credit. She is not blocking my chapters,” Turkey’s EU Affairs Minister Egemen Bagis told news agency AFP last week.

A public opinion poll published on Sunday revealed unease among Germans regarding Turkey’s EU entry, with six out of 10 surveyed opposed. Germany has a sizeable Turkish population of about three million.

France said this month it was ready to resume talks with Ankara on one chapter, breathing life into the fledgling talks.

Ankara welcomed the move as a sign of a change of heart in Europe and demanded stronger support from Berlin and Paris for a “fair chance” in its membership process.

Turkey, an associate member of the old European Economic Community since 1963, first sought to become an EU member in 1987 but only launched formal accession talks in 2005.

Germany is one of Turkey’s most important trading partners, with bilateral trade at $35 billion (€26 billion) annually, according to Erdogan. Merkel later Monday was to attend a Turkish-German economic forum in Ankara.

The chancellor, whose last visit was in March 2010, arrived in Turkey on Sunday and headed to the southeastern city of Kahramanmaras near the Syrian border to visit German troops stationed there since January.

The 300 German troops are operating two Patriot batteries brought in to protect NATO member Turkey from any conflict spillover from Syria.

Merkel also visited the ancient Anatolian town of Cappadocia, where she met with Christian minorities and toured the open air museum famous for its display of early Christian heritage.