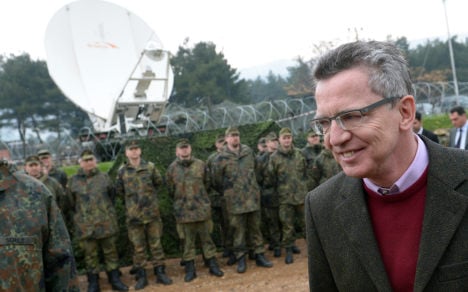 In an interview with Sunday’s Frankfurter Allgemeine Zeitung newspaper, de Maizière said the German public had become more supportive of soldiers in the Bundeswehr.

But he added that many soldiers did not see this, and were desperate for approval. “They have the understandable, but often exaggerated desire for appreciation. They have perhaps become practically addicted to it,” said de Maizière.

“Simply stop craving recognition,” he said. “One does not get the appreciation of others by asking for it, but by working well.”

The action was predictably unhappy, with Ulrich Kirsch, head of the Bundeswehr Association said the minister’s choice of words were “disappointing and absolutely inappropriate.

“German soldiers do not crave for anything – neither recognition nor anything else.”

If soldiers had a greater need for respect and recognition, it was because for a long time they had received too little of these things, he said.

Defence spokesman for the opposition Social Democrats Rainer Arnold, said that apart from the unfortunate choice of words, he could understand de Maizière’s comments.

“One must sometimes explain to soldiers that it is no disrespect of the army when people regard military operations sceptically,” he told Monday’s Süddeutsche Zeitung.

De Maizière was in Turkey at the weekend visiting the 300 German troops stationed there with Patriot rockets units as part of a NATO operation to support Turkish defences near the Syrian border.