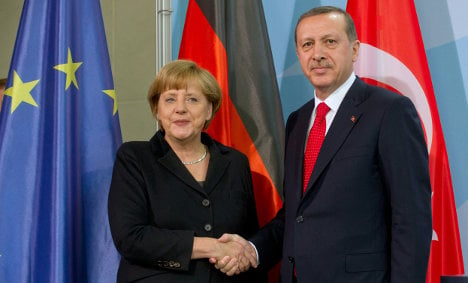 “We conduct negotiations without the result being fixed in advance. These negotiations have stalled a little recently and I am in favour of opening a new chapter in these talks so we can advance,” Merkel said in her weekly video message.

But she “a long path of negotiations lies ahead of us. Although I am sceptical, I have approved the continuation of the membership discussions.”

The comments were made a day before Merkel leaves for a two-day visit to Ankara where she is set to meet President Abdullah Gul and Prime Minister Recep Tayyip Erdogan with whom she is expected to discuss Turkey’s EU ambitions.

Turkey’s efforts to join the 27-member bloc have stalled in recent years, largely because of the long-running dispute with Cyprus and fierce opposition from other EU member states including France.

Stumbling blocks include Turkey’s human rights record, its large Muslim population and the eurozone debt crisis, which tested confidence in the bloc’s own future.

Of the 35 so-called policy chapters EU candidates must negotiate, Turkey has opened talks on only 13.

Turkey, an associate member of the old European Economic Community since 1963, first sought to become an EU member in 1987 but did not launch formal accession talks until 2005.

In an interview published in regional daily Passauer Neue Presse on Saturday, Germany’s Foreign Minister Guido Westerwelle called for an acceleration of the talks.

“If we don’t pay attention, the time will come when Europe will be more interested in Turkey than Turkey is interested in Europe.”

He said he is working with his European colleagues to open up blocked policy chapters.