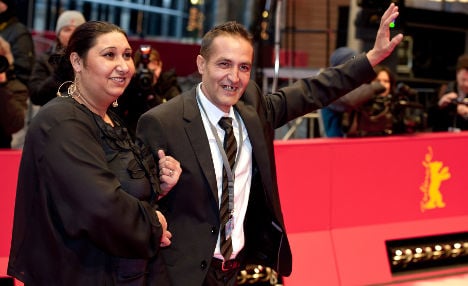 But now Mujic faces being forced to return to his previous job – hunting for scrap metal for just a few euros a day.

“Bosnia’s best actor lives here,” says a brightly coloured cardboard sign hung on a tree, near where the village’s asphalt road turns into the muddy path that leads to a Roma slum.

Shot on a very low budget over nine days with a digital camera, the film was one of the hits of the Berlin festival, also picking up the runner-up’s jury prize.

But all that is a long way from this poverty-stricken Bosnian village.

Svatovac, an isolated hamlet with some 200 inhabitants near the northern town of Tuzla, is Mujic’s home. He and his family live in a dilapidated house with a make-shift veranda and failing roof.

Guests are welcomed into a cold hall leading to a tiny room — the only one heated in the house. There, carefully shaven and neatly dressed, 42-year old Mujic smiles brightly to visitors through a thick curtain of cigarette smoke.

“It is like a fairy tale, all that has happened to me,” he says. “My ears are still buzzing and when I go to bed. I cannot fall asleep, I am full of joy.”

His 32-year-old wife Senada Alimanovic brings freshly made strong black coffee while Mujic recalls the thrilling days at the Berlinale.

Their director, Tanovic, had already won the 2002 Best Foreign-Language Picture Oscar for “No Man’s Land.”

This time however, he was telling their story: for he based the film on the Roma couple’s personal drama and they played their own roles.

“When I was five months pregnant, the doctors told me my baby was dead,” says Senada quietly.

“But since I had neither medical insurance nor 850 marks (€435) to pay, they refused to treat me at Tuzla hospital,” she recalls.

They turned her away despite the fact that the risk of septicaemia put her own life in danger. So Senada and her husband went to another hospital.

“I had to deceive doctors, presenting myself as my sister-in-law who had health insurance, in order to undergo a surgery at the last moment,” she told AFP.

Five months ago Alimanovic — already the mother of two girls — Semsa and Sandra — gave birth to a boy, who they named after Tanovic.

Mujic proudly indicates the Silver Bear statue, where it stands in its

place of honour behind the glass door of an old cabinet.

“This is our second baby, replacing the one Senada has lost. We call him Teddy bear,” he says.

“If the doctors had reacted faster, maybe our child could have been saved as well,” Mujic says.

In this village, everyone lives selling scrap metal, and before the glamour of the Berlin festival, that was what Mujic did every day too.

Before long, he may well have to do it again.

“Now we have only €35 left. In three days, I will take my cart again

But the money he normally earns from that work is barely enough to feed the family.

“I made five to €10 per day, just enough to buy bread and make soup

for the children. I would do anything to prevent them from begging on the streets,” he says.

A regular job is his greatest wish, nothing more.

“But no one has offered me anything yet. We only got some wood for heating since I came back from Berlin” last weekend, he says.

Mujic’s brother Kasim hopes the film and prize will shine more light on the hard life of the Roma community in Bosnia.

“Now when we are famous, I hope we will have some benefits from the prize… to get a job more easily, to get health insurance,” Kasim says.

According to the Organisation for Security and Cooperation in Europe

In the Tuzla region alone, some 15,000 Romas are scattered across about a hundred hamlets. Only one percent among them have a regular job and as many as 50 percent of them have no medical insurance, says Muradif Biberovic, a local Roma community official.

Bosnia does not come out of the film well, says Bibovic: “And that is a

“But that is the way it is and one should have a courage to say so.”