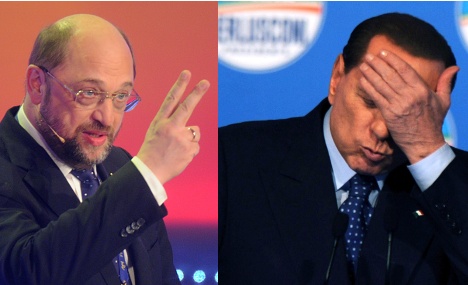 The “confidence” which Italy has gained through outgoing Premier Mario Monti should not be gambled away, he added.

for their country,” Schulz said.

Asked about a possible comeback by three-time premier in general elections beginning Sunday, other German politicians have said this week the decision lies purely with Italians – but hinted the 76-year-old billionaire tycoon was not their first choice.

Chancellor Angela Merkel told the Straubinger Tagblatt regional daily on Wednesday that Monti’s reforms had “brought a great deal of confidence worldwide back to the country.”

However, she insisted that it was “for the Italians to elect their government” and she did not want to get involved in “recommendations or speculation.”

In 2003, Berlusconi provoked an uproar in the European Parliament when he invited a heckling Schulz to appear in a film as a Nazi camp guard.

In Italy, “a producer is now shooting a film about the Nazi concentration camps”, Berlusconi shouted back at Schulz.

“I propose you to play the role of Kapo,” he said, referring to a guard drawn from camp detainees chosen by the Nazi SS.