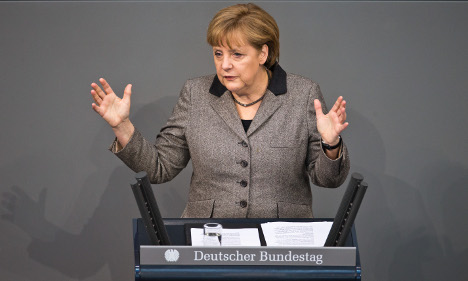 Briefing the Bundestag lower house of parliament on the results of the last EU summit earlier this month, Merkel said the deal struck on the 2014-2020 budget “could not be praised highly enough.”

Following talks that went through the night and lasted a full 24 hours in all, EU leaders at a February 7 and 8 summit in Brussels agreed the first-ever cut in the bloc’s spending for its seven-year budget.

The deal has yet to pass a significant hurdle, however, in the shape of the European Parliament, which must give its final say.

The heads of the four largest groups in the European Parliament, which is to vote on the budget in July, have said they could not accept it in its current form as it would not help boost the struggling EU economy.

Merkel said: “I know there will be hard discussions with the parliament. That is natural.”

“However, I think we would be well advised not to focus on what divides us, but to concentrate on what brings the council and parliament together,” she added, referring to the European Council of EU leaders.

That amounts to just one percent of the EU’s gross domestic product (GDP) and is a cut of around three percent from the budget of the previous seven-year period.

“Let me say this quite clearly: no-one in Europe… would have been able to understand it if we had said that everyone in Europe has to save, only Europe itself does not,” said Merkel to loud applause.