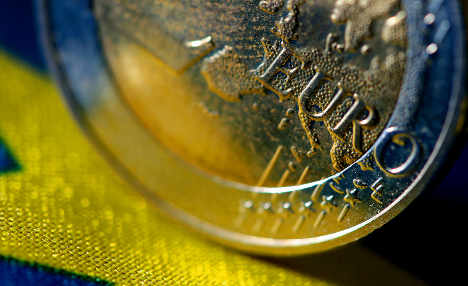 The widely watched investor confidence index calculated by the ZEW economic institute soared to 48.2 points in February from 31.5 points in January. It is the third consecutive monthly rise and brings the index to its highest level since April 2010.

Analysts had been expecting a much more modest increase to just 35 points this month. “As the latest gross domestic product (GDP) data show, the German economy cooled noticeably at the end of last year.

But the rise in investors’ economic expectations in February suggests that financial market experts are projecting an improvement in the coming months,” said ZEW President Wolfgang Franz.

“Experts have ticked off the weak fourth quarter of 2012. In their view, the headwinds for the German economy coming from the eurozone crisis are not as strong as they were a few months ago. If this remains the case in the coming months, the German economy will gain modest momentum again,” Franz said.

After GDP growth in Germany slowed throughout 2012, the economy actually contracted by 0.6 percent in the last three months as weak demand in other eurozone countries hurt exports.

Nevertheless, the government, the Bundesbank and other economic experts are convinced that the dip in growth will prove only short-lived and the economy will start growing again in the first quarter of 2013.

That means Germany will have avoided the recession that has entrenched most of its eurozone partners and the single currency area as a whole.

For the survey, ZEW questioned analysts and institutional investors about their current assessment of the economic situation in Germany, as well as their expectations for the coming months.

The sub-index measuring financial market players’ view of the current economic situation in Germany slipped by 1.9 points to 5.2 points in February, its lowest level since June 2010.

A frequent criticism against the ZEW index is that it can be volatile and is therefore not particularly reliable. Analysts nevertheless took cheer from the numbers, even if they said they would wait to see whether other sentiment indicators and even hard economic data backed up investor optimism.

The key Ifo business climate index is scheduled to be published later this week. “All in all, financial investors are increasingly bullish about the outlook for Germany’s economy and seem to expect a recovery with accelerating pace ahead,” said Barclays Research analyst Thomas Harjes.

Commerzbank economist Ralph Solveen agreed. “A growing percentage of analysts obviously assumes that the German economy has managed to turn around and that an upturn is imminent,” he said.

“However, indications as to whether or not they are right will only be provided by the purchasing managers’ indices and Ifo business climate, due out on Thursday and Friday, respectively. But these indices are also expected to continue rising.”

Natixis economist Johannes Gareis said the two main reasons for the increase in the ZEW index were the easing of the eurozone crisis and the low level of interest rates. “However, the economic situation of Germany’s trade partners is for the most part still quite weak, as the fourth-quarter GDP data indicated, and this led to the decrease in the current situation sub-component.

“Despite the upbeat reading, we remain cautious with regards to Germany’s prospects, as there are many challenges to overcome in 2013. Nonetheless, we still expect positive growth out of Germany, albeit at a slower pace than 2012,” Gareis said.

Berenberg Bank economist Christian Schulz said said the PMIs and the Ifo index due out at the end of this week will be more important in assessing the extent of the upswing. “We expect further improvements there after the strong gains in recent months,” he said.

Capital Economics economist Jennifer McKeown argued that the improvement was partly due to hints of further action on the part of the European Central Bank. But with the ECB’s words “yet to be followed up with actions and political risks in Italy growing, we fear that investor sentiment might weaken again before long,” she warned.