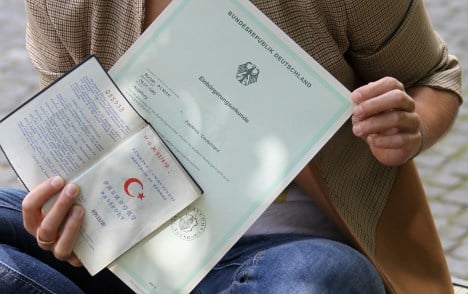 The current rules, introduced in 2000, mean that people born to a non-European Union family have both citizenships while they are children, but must decide for one or the other before they hit the age of 23. If they fail to demonstrate that they have renounced their non-German citizenship then, they automatically lose their German one.

The rule does not apply to children who have one parent from an EU country – they can retain their dual citizenship.

One young woman from Darmstadt, whose family is Turkish, experienced exactly that recently, Der Spiegel news magazine reported. She forgot to relinquish her Turkish passport before her 23rd birthday and lost her German citizenship as a result.

The magazine said the rule will affect more than 3,000 people this year, but that by 2018, this figure will rise to more than 40,000 each year. An investigation by the Office for Migration and Refugees suggested that 88 percent are likely to opt to become solely German at the expense of their other citizenship.

And now, five months ahead of the general election, junior coalition partner the Free Democrats (FDP) have put the topic firmly back on the daily political agenda.

Justice Minister Sabine Leutheusser-Schnarrenberger called on Tuesday for the laws to be changed. She told Der Spiegel‘s website, “Integration can be promoted by dual citizenship, as shown by the many cases of well-integrated citizens with dual citizenship.”

She said the current situation where people have to choose, needed to be checked if it led to people turning their back on Germany.

“We should not rule out a further modernisation of the citizenship laws and put dual citizenship on a broader legal basis,” she said.