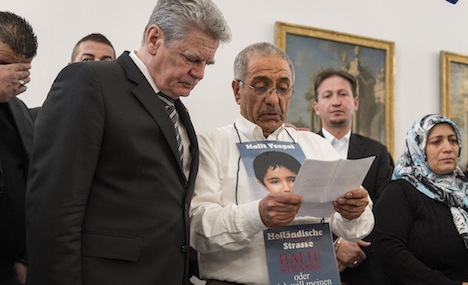 Meeting with the survivors of an unprecedented series of racist killings in Germany by a far-right terror gang, Gauck on Monday offered his sympathies at the presidential palace in Berlin.

“I want to ensure there is a continuing awareness of your suffering and that it is acknowledged,” he said. “And that mistakes and failures are uncovered, that we talk, and when necessary argue, what we must learn from it!”

Meeting with some 70 relatives of those who died,, Gauck also said there must be consequences from the bungled investigation in the murders of nine immigrant shopkeepers and one policewoman by the so-called National Socialist Underground (NSU) between 2000 and 2007.

“Why were there so many errors and bad decisions in the investigation?” he asked. “I, too, was shocked by the mistakes made by some authorities.”

For years, the German police failed to connect the killings, or even to consider a far-right motive, but falsely accused many of the victims of having ties to ethnic organized crime. They were even derisively called the “Döner Murders” because some of the victims worked at kebab shops.

“All people in our country must know that our state keeps them safe,” said Gauck.

But he admitted that more was need than institutional reforms – Germany society as a whole needed to change.

“It’s a question of how daily prejudice and resentment can be prevented from taking root,” he said. “It’s about our officials and institutions, but also many citizens, having another mindset.”

The head of the Turkish Community in Germany, Kenan Kolat, welcomed Gauck’s meeting with the family members, but he said not enough was being done to get to the bottom of the NSU crimes.

“Things are being covered up, files shredded. That can’t be allowed,” he told public broadcaster RBB.