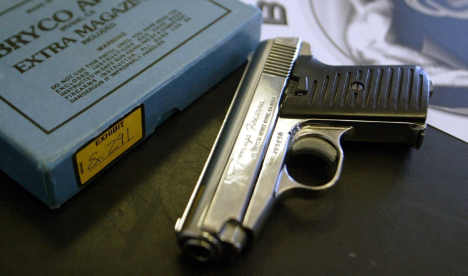 Der Spiegel magazine reported on Sunday that the state of Bavaria topped the list with 1.1 million, followed by North Rhine-Westphalia with 1 million and Baden-Württemberg with 700,000.

The new national gun register bundles together the data from over 500 local authorities, which were previously not interconnected. Some still had not even digitized their records, and still kept weapons ownership information on index cards.

Germany’s lower house of parliament, the Bundestag, decided to introduce the weapons registry in April of last year, exactly a decade after 16 people were killed in a shooting rampage at a school in the eastern city of Erfurt.

More recently in 2009, 16 people died and nine were injured in a shooting at a school in Winnenden in southwestern Germany. On Friday, Germany’s Constitutional Court rejected a claim by parents of victims of the massacre that German gun laws introduced since the shooting spree did not provide citizens with adequate protection.

The Winnenden gunman used his father’s legally-owned weapon to carry out the shootings. Since the shooting spree took place, the legal age for owning firearms has been raised, and those failing to store their weapons safely could now face a prison sentence.

The European Union has called for every member country to bring in a central weapons registry before the end of 2014. According to per capita data, Germany comes in fourth place behind the United States, Switzerland and Finland for private gun ownership, ahead of Mexico, South Africa and Russia.