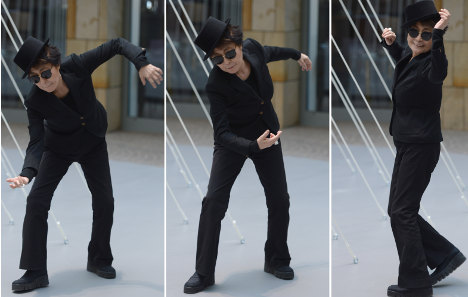 Ono, who turns 80 next week, “is a unique, indeed perhaps even a mythical figure, not only in the art world, but in the field of music and the peace and feminist movements as well,” said the museum’s director Max Hollein.

Most people probably know Ono as the widow of Beatle John Lennon who was shot dead outside his New York apartment in 1980. The two famously staged “Bed-Ins” in 1969 as a non-violent protests against war.

Ono, born on February 18, 1933, was an avant-garde conceptual artist in her own right long before she met Lennon and was associated with the likes of composer John Cage and the founder of the Fluxus contemporary art movement, George Maciunas.

“She is familiar to practically everyone, yet only very few people are fully aware of the outstanding artistic oeuvre she has created. Yoko Ono’s 80th birthday offers us an ideal opportunity to change that,” Hollein said.

The exhibition, entitled “Half-a-wind show. A retrospective”, surveys around 200 objects, films, spatial installations, photographs, drawings and textual pieces from the past 60 years of Ono’s career.

It pays particular attention to works from the 1960s and 1970s, featuring ground-breaking works such as the “Instructions for Paintings” first shown in 1961 and 1962 and the performance “Cut Piece” from 1964, in which the audience was invited to cut the clothes from the artist’s body with sharp scissors while she sat on the stage.

A number of large-scale installations and recent works are also on display and Ono has also developed a new work — the installation and performance “Moving Mountains” — specifically for the Frankfurt exhibition.

Curator Ingrid Pfeiffer said Ono’s work “often tends toward the immaterial, the substance of which consists to a lesser extent of objects and installations but to a significant degree of ideas and texts. It is not easily presented.”

Ono, wearing her trademark sunglasses, told a news conference that Lennon “used to say to me: ‘bring me some truth’.”

“We artists have the dignity to tell the truth to the people, unlike politicians,” she said.”But we only know half the truth. The other half is invisible. You have to imagine it, you are the creator, you have to participate. You change the world by being yourself.”

The exhibition runs in Frankfurt until May 12 after which it will tour to Denmark and Austria and then move to the Guggenheim museum in Bilbao in Spain.