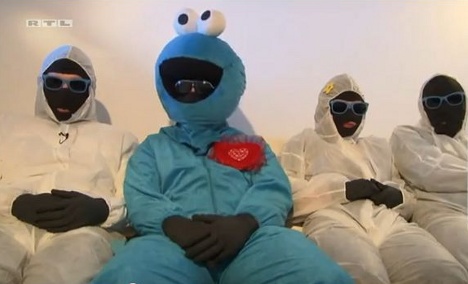 The theft of the 20-kilo golden biscuit from the headquarters of the Bahlsen firm, which among other things produces Leibniz butter biscuits, made international headlines last month.

In an interview with broadcaster RTL, one member of the gang appeared in a Cookie Monster costume, while the others sported balaclavas and sun glasses. They produced what they claimed was an original copy of the ransom note as well as video footage of the theft.

The group expressed little remorse for their actions, claiming people had “laughed themselves silly” thanks to their stunt. One member described how the large golden Bahlsen biscuit had been irresistible: “It’s like a giant toy and so shiny. You just want to have it because it’s so beautiful.”

The biscuit gang had demanded ransom in the form of biscuits for all the children at the local hospital and €1,000 donation to an animal charity. Bahlsen responded by distribute thousands of Leibniz biscuits to several Hannover social institutions.

The golden biscuit was returned to the company earlier this month after it was found strapped to a horse statue in front of the city’s university.

Police are now reported to be examining the television footage, but the cookie kidnappers seemed unconcerned.

“I don’t think we’ll go to prison for this,” one member said. “We might get a fine or some community service. Then I’d gladly wear a Cookie Monster costume and give away biscuits.”