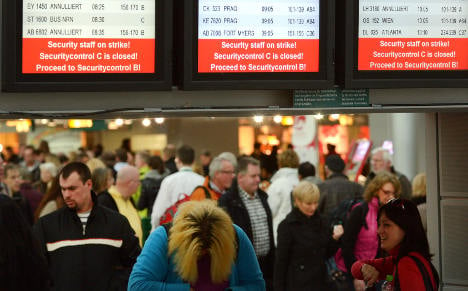 Service industry trade union Verdi said it would call out its members at the two airports on Friday after having caused huge delays and flight cancellations on Thursday in Hamburg and Düsseldorf.

Thousands of passengers had their plans disrupted on Thursday when security staff walked off the job at 4am as part of an ongoing labour dispute.

By lunchtime around 200 arrivals and departures had been cancelled at Düsseldorf while many more were delayed. In Hamburg nearly half the planned 179 planned flights were cancelled, while only two of the normal 20 security gates were open.

Management at both airports openly criticized the strikes and have called on all parties involved to come to an agreement quickly.

Security staff are pushing for an hourly wage of €14.50 and better working conditions. The federal association for safety BDSW offered them €12.50 from March and then €13.50 from January 2013 – but this was rejected.

At the end of January security staff held strikes, throwing Hamburg, Düsseldorf and Cologne/Bonn airport into chaos for several days.