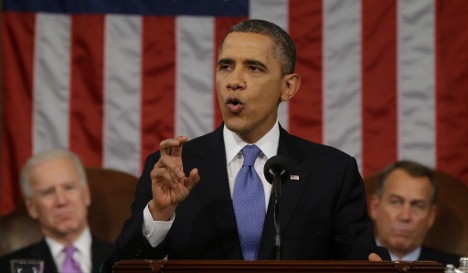 “I welcome the fact that the president is pushing for further progress with nuclear disarmament,” said Minister Westerwelle, who has also championed the cause of ridding the world of nuclear arms during his three years in office.

Nuclear disarmament and non-proliferation of nuclear weapons remain central concerns for global security, he said. “That’s why I hope that Russia will take up the offer of further negotiations,” added Westerwelle.

Westerwelle also praised Obama’s new initiative to establish a free trade zone between the United States and the European Union.

The framework of the Transatlantic Trade and Investment Partnership is expected to be drawn up this year. It would aim to remove protective tariffs on cars, food and computers to encourage more trade between the US and EU.

“I hope that a powerful political momentum builds up here and that the real work can happen quickly,” he said.

Steffen Seibert, the German government spokesman, told a regular briefing that Berlin believed such an agreement would be “a valuable contribution for more growth and more jobs on both sides of the Atlantic.”

“Our expectation is that … in the course of the Irish (EU) Presidency (which runs until the end of June), the preconditions can be laid down for the beginning of negotiations,” he said.

“It’s certainly a signal to Europeans that we are still an important partner for the Americans,” Steinmeier told ARD television channel on Wednesday.

Obama’s speech, although heavily focused on US domestic affairs, had helped to ease Europe’s concerns that the US was solely prioritizing Asia as a trading partner, said Steinmeier.

statement released Wednesday that economic growth in both areas could be boosted by as much as 1.5 percent if a deal were negotiated. The US-EU trade relationship is currently worth $700 billion annually and provides some 14 million jobs, AmCham Germany said.