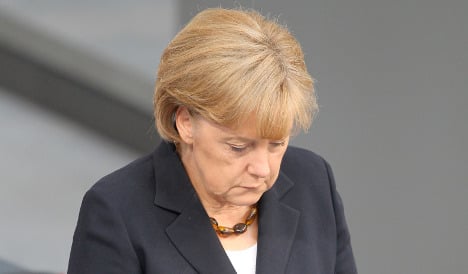 “We want to see Obama and Merkel dead!” sang a man in German in the three-minute acapella video posted online last weekend, which has since been removed by blogging site WordPress, wrote Die Welt on Monday.

“Our troops are already there, what joy. You’ll bleed, your heads will roll! … Oh Allah, give the German people what they deserve!” sang the man, who calls himself “Abu Azzam the German.”

Security officials told the paper they believe the man is working together with Austrian Islamist Mohamed Mahmoud and his German wife Miranda K., who moved to Egypt from Erbach in Hesse in 2012.

Mahmoud is believed to be the leader of the banned Islamist group Millatu-Ibrahim. Now in Egypt, he continues to call for attacks on German soil in the name of jihad through a propaganda network he calls Global Islamic Media Front (GIMF), said the paper.

Mahmoud is thought to be behind this latest German language platform for jihadist propaganda videos, which also hosted a series of extremist diatribes and songs – culminating last weekend in the murder threat against Chancellor Merkel and warnings of an attack on the Reichstag parliament building.

German security officials are monitoring Mahmoud’s activities closely, concerned that Islamists might take up calls to violence on German soil.

At the same time, increasing numbers of German Islamists are travelling to Egypt to train as militants, Interior Minister for Baden Württemberg Reinhold Gall warned on Monday, and said there was little that could be done to stop them.

“We can’t keep an eye on every potential terrorist offender around the clock, no matter where he has gone to,” Gall told the Stuttgarter Nachrichten regional newspaper.

Gall said German security networks were taking the threat of large-scale attacks on German soil very seriously, he said, although support for jihadist extremism in the country was minimal.

Intelligence networks were now more likely than before to receive tip-offs about radicalised, potentially violent Muslims from their concerned parents and friends, the minister told the paper.