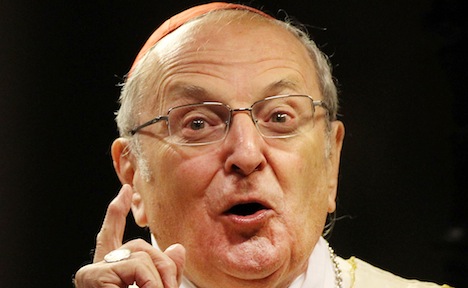 Meisner’s archdiocese confirmed that he recently wrote a letter to all priests and lay workers serving under him.

“In the past few weeks, the Church in Cologne has experienced a public opinion storm unlike anything I’ve every seen in my years as bishop,” he wrote, according to the Kölner Stadtanzeiger newspaper.

He said Catholics faced increasing hostility after two Church-run clinics in Cologne turned away a rape victim last month. That incident came not long after the Church kyboshed an internal investigation into widespread allegations of child abuse at Catholic institutions in Germany.

The 79-year-old archbishop wrote that he regretted how both incidents had damaged people’s trust in the Church. However, he also lamented “the malice and aggression that part of the public confront us with.”

In particular, it was the Catholic Church’s clear positions on “protecting life, marriage and family” that polarized attitudes toward it, he said.

Meisner went on to cite “French scientists,” who “now view this phenomenon as ‘Catholic-phobia’ and point out that no other region or confession faces such targeted public attacks as does the Catholic Church.”

The letter comes on the heels of comments by Archbishop Gerhard Ludwig Müller, who last week said there was “pogrom atmosphere” against the Church. Müller is in charge of the Vatican’s official doctrine.

Some members of the clergy, however, believe the Catholic Church is at least partly to blame for the current negativity against it.

“I do indeed feel there’s been an aggressive mood against the Catholic Church recently,” Essen’s Bishop Franz-Josef Overbeck told the Westdeutsche Allgemeine Zeitung. “But such terms are not helpful in this debate, especially when they have historical connotations.”