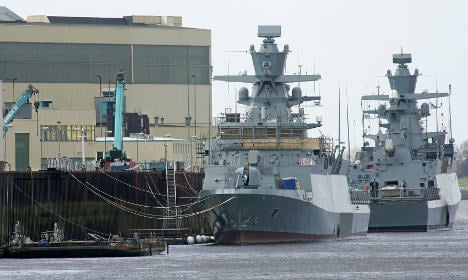 Germany’s federal security council has issued a positive response to a preliminary request for the sale by the Bremen-based Lürssen shipyard specializing in yachts and military boats, the Bild am Sonntag said.

The council, which meets secretly and includes Chancellor Angela Merkel and eight cabinet ministers, has to authorize German arms exports.

The boats, worth between €10 million and €25 million each, are expected to be delivered to Saudi Arabia within two years after the contract has been signed, wrote the paper.

In December the paper reported that Riyadh planned to buy at least 30 German armoured vehicles, known as Dingo 2.

Opposition parties criticized the deal on Sunday and demanded more clarity over the government’s arms export policy. Critics say the weapons could be used against protesting civilians in the Middle East.

But Merkel’s government has always referred to Saudi Arabia’s strategic importance in the fight against terrorism and as a stable partner in the volatile region.

“Mrs Merkel is wrong if she thinks that the enemy of an enemy is automatically Germany’s strategic partner,” Katja Keul, chief whip of the Green Party told Der Spiegel on Sunday.

Thomas Oppermann, chief whip of the opposition Social Democrats (SPD), also voiced criticism of the project. “The German government apparently wants to completely arm Saudi Arabia and has learnt nothing from the public protests against supplying this country with weapons,” he told Bild.