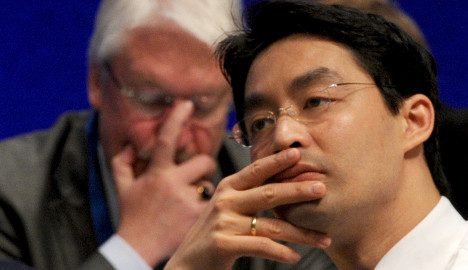 “In the case of Phillip Rösler I’d like to know whether our society has come far enough to accept an Asian-looking vice chancellor for much longer,” deputy state premier of Hesse Jörg-Uwe Hahn, told the Frankfurter Neue Presse on Thursday.

Immediately his comment was jumped upon by members of the opposition Social Democrats (SDP) and Green party and decried as racist. Rösler, who was born in 1973 in Khanh Hung, Vietnam, and was adopted by German parents, is the first German cabinet minister to have a completely foreign ethnic background.

“It’s scandalous,” head of the SPD fraction Frank-Walter Steinmeier told ZDF television and added he expected Hahn to step down in light of his comments about his party leader.

Hahn, who is known in the party for inelegant formulations and unfortunate remarks, said he had been misunderstood. He had been taken for a racist, but had actually been referring to “widespread, often underlying racism” in German society, explained Hahn in a written statement on Thursday afternoon.

But it was too late, wrote Der Spiegel on Friday, the comment was out and the FDP – still reeling from sexism allegations over inappropriate comments made by Rainer Brüderle to a female journalist – found itself once again on the defensive.

In an attempt to save the situation, Rösler himself issued a statement on Friday to declare Hahn a close personal friend of his who was “above all suspicion of racism.”

“I don’t understand the fuss about Jörg-Uwe Hahn’s much-criticised interview comments,” said the FDP leader, vice chancellor and economy minister in the statement.

But then the opposition, smelling blood, simply changed tack. Hahn himself was not a racist, but he had insulted German society by calling voters racist.

“An unashamed allegation of racism towards society is hidden in Hahn’s formulation,” secretary general of the SPD parliamentary fraction Thomas Oppermann told the Mitteldeutschen Zeitung regional newspaper on Friday.

So what, said head of FDP youth wing Lasse Becker, however crudely put, Hahn had a point about German voters. “The choice of words was obviously unclear. But it’s necessary to have this debate,” Becker told the Passauer Neue Presse regional paper on Friday. He had often heard voters make racist comments about Rösler, he added.

“At the election campaign stalls in the street I often hear: I would vote for you guys, but you have to get rid of the Chinese guy first,” said Becker. “The problem is everyday racism in Germany, that’s what has to be addressed.”

Others agreed: “As an FDP member I often experience open or veiled racist comments with a view to Rösler,” Patrick Kurth, general secretary of the FDP in Thuringia, told the Mitteldeutschen Zeitung on Friday.

“At the same time we can be proud of our country, in which it is possible that a victim of the Vietnam war can make it into high office,” he added.

The Turkish Community association jumped on the opportunity to widen the discussion, wrote the Tagesspiegel on Friday, and has called for an open debate on German society’s stubborn racism problem.

But the government sees no need for a debate, vice government spokesman Georg Streiter told the paper, hinting at concern in government circles that any further scandals may damage not only the FDP’s, but also their coalition partner the conservative CDU’s chances in September’s election.