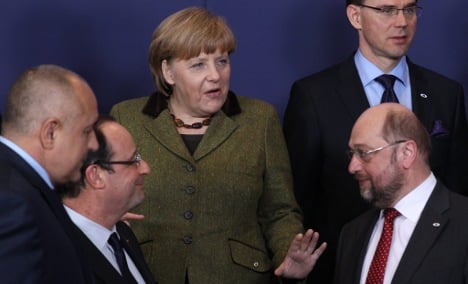 Negotiating for nearly 26 hours with little break, Merkel, backed by British Prime Minister David Cameron, led a sustained push for the EU budget for 2014-2020 to share in the austerity national governments are facing. The tentative agreement would trim spending by three percent over the rest of the decade.

“In my opinion this is a good deal and it is important,” said Merkel. “The effort was rewarded.”

Deal done! #euco has agreed on #MFF for the rest of the decade. Worth waiting for.

France, along with Italy, fought to protect spending it sees as essential to boost growth and jobs at a time of record unemployment, but indications early Friday were that Paris could live with the deal.

“It is not a fantastic compromise deal but it is acceptable,” said a French diplomatic source.

The latest figures would represent a 3.0 percent cut from the 2007-13 budget and were less than the €973 billion that Cameron and northern EU allies such as the Netherlands rejected at a budget summit in November that collapsed without any deal.

In the EU budget process, commitments refer to the maximum amount that can be allocated to programmes while actual spending or “payments” is usually lower as projects are delayed or dropped.

Originally, the European Commission had wanted a 5.0 percent increase in commitments to €1.04 trillion ($1.4 trillion) – about one percent of the EU’s total gross domestic product.

After a six-hour delay Thursday, leaders thrashed out the details overnight before breaking in the morning.

Amid the cuts, they also managed to find €6 billion for a new fund to tackle youth unemployment. Jobless numbers across the EU are currently over 26 million, with nearly three out of five under the age of 25 out of work in Spain and Greece.

But there is another important hurdle still to clear – the European Parliament must approve the deal and lawmakers have already made clear they are in no mood for more austerity.

Parliament head Martin Schulz said bluntly on Thursday that he and the assembly would not accept a budget which would compromise EU programmes and undercut its future. “That’s called a deficit. I won’t sign a deficit budget anymore,” he said.

The draft showed key budget areas – the Common Agricultural Policy support payments to farmers and Cohesion Funds, a crucial source of money for new EU members seeking to catch up with their peers – to be largely untouched compared with the November figures.

But plans to use €40 billion to leverage private investment in cross-border energy, transport and digital networks was slashed by a quarter and EU administrative expenditures were cut as well. Some of the roughly 35,000 EU civil servants have already begun strike action over fears they will lose their jobs and the perks.