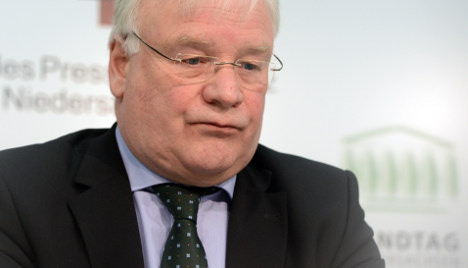 Bernd Busemann, a member of Angela Merkel’s conservative Christian Democratic Union is currently serving as the northern German state’s top justice official. He told a press conference in Hannover that he had made a terrible error when he got behind the wheel of his car on Tuesday evening while drunk.

He was caught at a routine checkpoint and breathalyzed, with his alcohol level measuring what he described as “somewhat over 0.8 pro-mille” – well over the 0.5 drink-drive limit.

Busemann, 60, will have to step down as minister soon in any case following the recent election which replaced the CDU-led coalition with one led by the Social Democrats.

But he was nominated by his party to become state parliamentary president on Tuesday. And he said most of his parliamentary colleagues joined him afterwards to celebrate at a restaurant.

There, he said, he “drank one or two beers” and then walked over to his office to do some more work. Afterwards he got into his official car to drive home – and was stopped by police as he was parking.

He said he had thought he was still okay to get behind the wheel. But this was obviously wrong. “I should not have driven,” he admitted on Thursday. He is due to be elected as president of the Lower Saxony parliament on February 19, and said he still expected to have the full support of his party.

But the Social Democratic parliamentary party leader Johanne Modder said she was disappointed by Busemann’s behaviour and that he had lost credibility.